Reply
Re: Fred Noonan Criticized
From: Gary LaPook
Date: 2016 Jun 22, 22:18 -0700
(re-posted to add attachments that didn't come through on original post.)
It was not Noonan's job to operate the radio, he was just the navigator, Earhart had hired Paul Manning as the radio operator but when he dropped out after she crashed her plane on takeoff from Hawaii on March 19, 1937 she did not replace him.
Nor did she take the opportunity to become knowledgeable herself and this led directly to the loss. The original plane called for two independent, redundant, methods for finding Howland, radio direction finding and celestial. Earhart's failure to replace Manning eliminated the first method leaving them with only celestial which failed due to clouds in the area, this put all their eggs into one basket. Earhart realized the importance of celnav and her last radiogram says "FN MUST HAVE STAR SIGHTS."
Her lack of understanding of radio led her to specify the homing frequency of 7500 kcs to be transmitted by the Itasca to be way too high to be utilized by her radio direction finder which was limited to 4800 kcs. When she couldn't get a bearing with her equipment she asked Itasca to take a bearing on her signal on 3105 kcs but Itasca had informed her that their RDF only worked on frequencies below 550 kcs. Her radio had been specifically modified to cover the international calling frequency of 500 kcs when Manning was part of the crew but since she did not understand to importance of this frequency and she didn't take the opportunity to learn Morse code, after he left, she had the long wire antenna, used on this frequency, removed since she couldn't do Morse code on that frequency. Had she, at the end, attempted to send a continous signal of 500 kcs then it was possible that the Itasca could have taken a bearing on her signal which would have told Itasca where to search. Joe Gurr had tuned the existing "V" antenna with an external tuning coil so it should have been able to put out at least a weak signal on 500 kcs.
The loss was attributable to Earhart's filure to follow her own original plan of having a skilled radio operator on the crew.
I previously posted this on TIGHAR:"I don't judge Earhart's performance against today's standards, I don't even judge her against the 1937 standards. I judge her performance against the standard she set for herself. When she was planning the flight, she and her advisers identified a need for a competent radio operator for the flight yet when Manning dropped out she ignored her own prior planning and did not look for another radio operator. Or, with the three months she had available, she could have learned radio operation and Morse code to an acceptable level of proficiency. She did neither. Without the radio she put all her eggs in one basket and, for some unknown reason, the celestial navigation did not work so they both died.  She didn't even meet her own standard."
gl 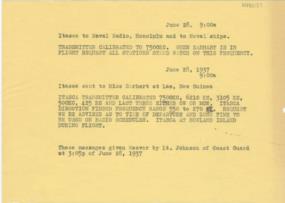 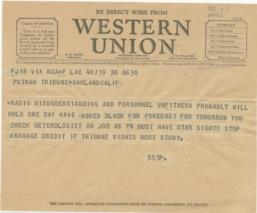