Brad Morris you wrote: If not mistaken, the green arrow points to the radio mast and the red arrow points at the porthole for the periscopic sextant.

The periscope couldn't be that tall, nor of a shape to withstand load (crossed beams).  It must therefore be a fixed mast.
Less sure is the porthole.  Undoubtedly a reinforced circular aperture in the roof of the plane.   But is it for a sextant?  I can't think of much else that would be for.

The green arrow definitely points to the mast for the HF aerial which ran back along the top of the fuselage.  The red arrow might be pointing at the site of a smaller swept back wing aerial (VOR di-pole??) shown here  http://www.vaq34.com/vxe6/billyace1dconnie.jpg . Note also the small hatch behind the HF mast and slightly to starboard.  An inside view is shown here https://www.deviantart.com/richardjjones/art/Lockheed-Super-Constellation-flight-deck-cockpit-381035630 .  The hatch is right by the nav position.  As the insulation in the roof shows no central periscopic sextant mounting, it’s quite possible that the hatch cover also contained the sextant mounting.  When in use, the Kollsman periscopic sextant only peeps out from its mounting, as shown below.

Incidentally, the earliest Constellations had astro domes.  They were also arguably the first pressurised passenger aircraft in regular use.  Legend has it that one of these astro domes popped off under the pressure taking the unfortunate navigator with it.  This might well have given the impetus for the development of periscopic arrangements in pressurised aircraft.  DaveP 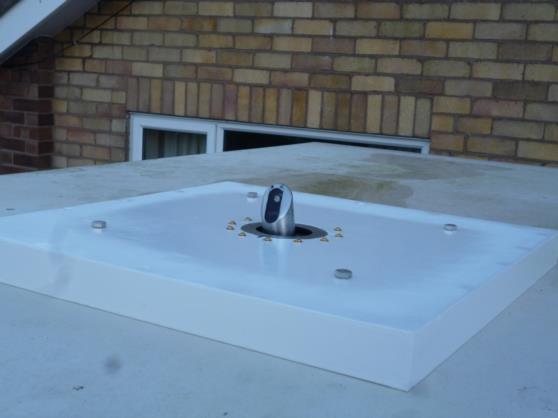