A while back, Robert Eno wrote:
" I think the finest bit of wisdom I have seen on this subject matter was offered by one of my fellow countrymen, Mr. William Hawes several days ago when he wrote:
"when I was in the navy I was taught, that when in coastal or pilotage waters, to pick the worst scenario/most dangerous position in the cocked hat. Otherwise when well offshore I generally picked the position closest to the centre or if I had a good DR/EP, I would place the fix closest to the DR/EP position."

I too, am not a math whiz and in any case, for practical navigation, I am more inclined to adopt William Hawes' rule of thumb and leave the statistical analysis on shore."

It's interesting how seductive this bit of navigational lore is, but it's really nothing more than LORE, a bit of "noise" that was passed from one navigator to another with no basis in real analysis. Picking points inside the "hat" is pointless (yes, "pointless points"). Shifting from one side of the "hat" to the other is equally pointless. The interior of the triangle, corners or otherwise, has no navigational significance whatsoever (except, of course, that the "most probable position" is inside and equivalent to the geometric "symmedian" point). It's the error ellipse that matters if you want to place limits on confidence in the fix! One could argue that no navigator would ever get in trouble by reporting a position that leads the ship's commander to believe that he or she should be more prudent with respect to some nearby danger, but is that really true? Or is it just a prayer?? Is it the navigator's job to mislead?

Need a specific example? Suppose I am off some north-south coast, and I estimate by DR that I am ten miles offshore. I shoot three stars: one due east, one at azimuth 355°, and one at azimuth 180°. From my DR, for all three stars, I get intercepts of 0.7 nautical miles (towards each azimuth). Plot them out as in the attached image. It's an extreme example, of course, but that's the point. It highlights the fact that the "corner near danger" is not a meaningful fix. It would be misleading to report that as the position from the observations. The best fix from the celestial observations is very close to the LOP for the star that was due east. The celestial fix is well offshore and based on the available data, it is highly unlikely that the vessel is anywhere near that "corner near danger" even if that concept DID have meaning. 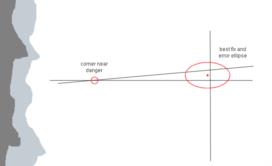