It's not hard to find copies of Bowditch's "New American Practical Navigator" from the early 19th century. Decent copies often sell for less than $200, and "reading copies" (with severely damaged bindings, etc.) sometimes turn up for $50 or so. But the first edition of Bowditch, published in 1802, attracts collectors and investors. Jackson McDonald pointed out to me that there's one up for auction on ebay. It's been re-listed a few times, and currently it's offered at $6500 or best offer. I can't see it even at a tenth of that price as an artifact. It only makes sense as an investment purchase. Do you believe that the price will rise over time?

There are some scans of pages in the auction including a page with "scrap paper" computations. It's nothing complicated --just latitude by Noon Sun. Below you'll see the calculation in the navigator's original hand and also my attempt at a transcription (keeping the eccentric spelling). It doesn't matter much, but the year is probably 1811.

The navigator begins with the observed Noon Sun altitude: 58° 59'. Writing angles, as in this case, as 58..59 was customary. Notice the standardized correction for dip/refraction/SD of +12 minutes. This was very common throughout the 19th century for Sun LL sights and implies that all navigators were about ten feet off the sea and refraction was near enough to one minute of arc (+12 = +16 for SD -3 for dip -1 for refraction). After making that correction, the navigator gets zenith distance, Z.D., by subtracting the corrected altitude from 90. And then Lat = Z.D. + Dec. Easy! Historically navigators had to study rules for various cases. For a modern navigator, it's enough to know that south latitudes and declinations are negative, and Z.D. is negative if your shadow at noon points south.

Finally the calculation ends with "Lat in". Years ago I wondered if this had any special meaning... did "in" imply some specific variety of latitude, like "Lat DR" would imply dead reckoning latitude? In fact, it seems to have been nothing more interesting than the latitude that the vessel was "in". By writing "Lat in" the navigator was perhaps putting a conclusion on the calculation, saying "Here's the latitude we are in". This terminology, both "lat in" for latitude and "lon in" for longitude, was common in the early 19th century but fading fast. 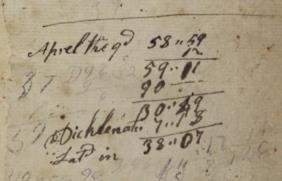 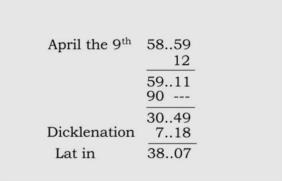