Noel you wrote: Obviously, the military planners were eventually in favor of aircraft sextant averagers. Does anyone have reported, or direct, information on the navigators preferences or practices?

Generally, in the military, with few reservations, you do exactly as you’re told.  That’s what all the basic training is deigned to instil.  Moreover, certainly in the RAF, even in wartime, navigators mark each others logs and charts to maintain standards.  Therefore, you follow the standard although the standard might change between commands.  The Vulcan force used two star seven shot sandwich fixing whenever possible.

You also wrote: I ask because most of my time with an A-10 is spent chasing the bubble and correcting my own mistakes.

Could I ask where you’re observing from: the ground; the air; or at sea.  Unlike a twin reflection marine sextant, any gravity sensed vertical will be subject to acceleration errors in the plane of observation.  Stationary on the ground, there will be no acceleration errors, so averaging shouldn’t be necessary for acceleration errors alone.  In the air, averaging has been found to be beneficial, and automatic averaging has been found better than pressing the trigger ‘when it seems right’.  Good results depend both on practice and the stability of the air and the aircraft you’re operating in. At sea, gravity sensed verticals have been found to be inferior to the natural horizon in good visibility.  German submarine service did use the SOLD system, but this was because, as WW2 progressed, they increasing found it necessary to surface only at night when the natural horizon might be difficult to use

You also wrote: I'm usually thinking that I'd rather see one good image and stop than to try to maintain a continuously good image, adjust the reading, and wait while the averager takes all of its readings and times out.

The reason ‘pressing the trigger when it seems right’ didn’t really work was twofold.  Firstly, the human balance system is easily fooled, when there is no natural horizon to concentrate on, but also because of human nature.  In the attached diagram the dashed line shows the true altitude of a body over time.  The solid line shows the measured altitude, if it could be followed perfectly, whilst under acceleration errors caused by the dynamic response of the aircraft.  If you take five second sections, you’ll see that the bubble appears steadiest when acceleration error is greatest and least steady as acceleration passes through zero from + to – or – to +.

you also wrote:  I haven't used one but I think that some aircraft sextant are only usable with the averager and the sight window is otherwise closed.

So long as the aircraft sextant is wound up, or otherwise ready to operate you can see out and take an instantaneous observation if you so wish simple by reading the same index counters that you use to set the sextant with ready to look for the star.  In fact that’s all I ever do observing from the ground.  I recently recorded the Sun from the ground for thirty minutes either side of meridional passage without ever pulling the trigger.  Most sextants are quite understanding of human nature.  They won’t let you see through if they're not wound up or otherwise ready for use.  Smith’s pendulous reference sextants even wink at you after five seconds just to let you know they really are running and you didn’t forget to pull the trigger.  They also go black when the observation’s complete.  If this sounds daft, don’t forget you might be in a noisy aeroplane wearing a sound insulating helmet, so you might not hear the sextant working. The only things they won’t forgive is changing gear when the clockwork’s running and forgetting to read the average counters before you rewind the sextant.

You also wrote: If a navigator could choose, would he or she take one or more good sights manually or use the averager?

As exlained above, it depends upon the situation, but in the air, use automatic averaging. DaveP 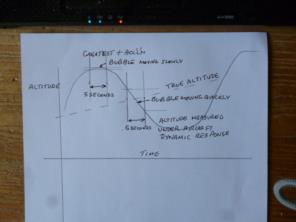