Initially, I wrote off the discrepancy in the Moon's position as being caused by Meeus' simplification of the algorithm for computing its position. But I decided to take a closer look at what was going on. It turns out there was a problem - actually two problems - and they had nothing to do with Meeus' formula.

The first problem was that I had screwed up a formula which accounts for leap years. So dates before March 1st on centennial years not evenly divisible by 400 were calculated incorrectly. That is now fixed (I think).

The second problem was my data for delta-T, which Bill also mentioned. I had gotten the data from two IERS documents: EOP C01 IAU2000 1846 to Now, and Bulletin A. The former lists TAI-UT1. So, I simply added 32.184s to all of those values. Simples, right? Wrong. I plotted the values from MICA and the values I was using side-by-side. The plot is attached below. The black line is MICA's values, the red line is mine. I think you can see the problem. Going backward in time, the value hits 32.184s around 1955 (as it should) ... and stays there! I had simply never double checked to make sure what I did made sense.

So, I did some searching and found a few polynomials at NASA's website which approximated historical values of delta-T. After consolidating the data from those, I added it to the plot (the dashed yellow line). Much better. That takes care of the 1/1/1900 19:12 discrepancy. And as a bonus, I was able to extend the table of values a little further into the past. (Which is why I didn't just use MICA's values in the first place: they stop at the year 1800.)

I have attached a new version of my spreadsheet below. I hope you all will find that it is a bit more accurate now.

And thank you again, Bill! 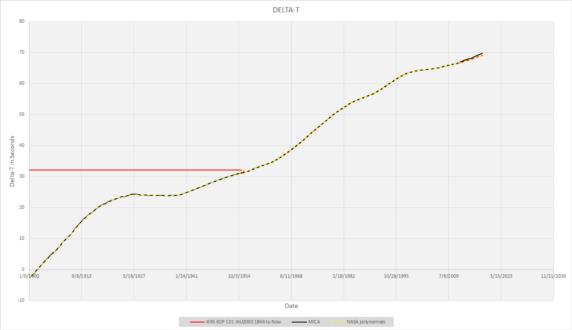