Bill Lionheart
We went out last night and got you some real star lines (a cheap but not very romantic way to spend Valentines evening).
The results are as follows:

The calculations are below,  I’ve not bothered to double check them figuring that independent observers are more likely to pick up an error than I will.

We found a nice isolated spot in open country, but there was still an orange glow from the sodium lights at Waddington to the north and Cranwell to the south.  Still, it was better than in the village.  Mrs P sat in the warm inside the car recording times and sights, while I stood outside resting the sextant on the car roof.   I was hoping to take sights on Procyon, Rigel, and Dubhe.  The first two sights went well, but I could find nothing in the Plough strong enough to burn through the remains of 79 years of crud, which mild renovation had been unable to shift.

I hung on trying for a sight for far too long and should have transferred immediately Mars, which was glowing nicely.  By the time I decided to do so, Mars was already disappearing into the ground haze and had lost its strength.  Finally, Arcturus began to rise in the north east, but by the time it was clear of the haze, my bubble was telling us it was past its bedtime by refusing to form any other way than far too big, or not there at all.  Nevertheless, judging by the nice tight triangle, it can’t have been that bad.

When I started doing the calculations this morning, I was slightly miffed to find that Arcturus was still too low to be one of the seven stars featured in AP3270 Vol 1.  Fortunately, its declination was less than 29 degrees, so I could use Vol 3, but this involved messing around with SHAs, which was something of a shock to the little grey cells.  I’m more of a two star sandwich fix person myself, but the more three body fixing I do, the more it seems that the tighter the triangle, the lower the chance of your true position being inside the triangle. DaveP 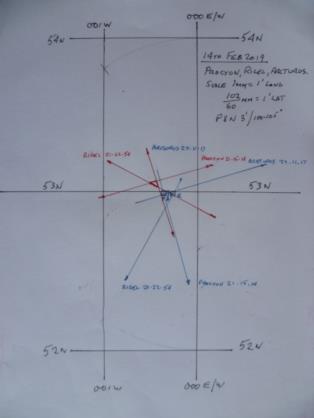 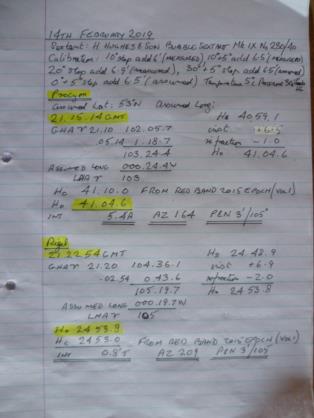 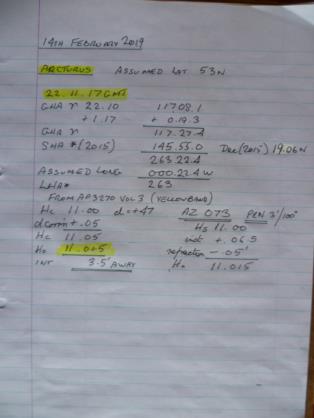