What a pity you didn’t post this a day earlier.  We had the Sun all day yesterday, and I was greatly tempted to get a sextant out.  The Astrovan is still full of rubbish dumped there so we could sleep ten indoors over Christmas.  However, I’ve since found that a suitably chocked bubble sextant will sit nicely on a south facing bedroom window ledge.  Also, I can open the window to avoid observing through double glazing and kneel with my front against a radiator, lovely!

Even if you avoided the sin of using LOPs closer than thirty degrees, just observing a single body, e.g. the Sun over up to six hours might still lead to trouble, because all your observations would be on one side i.e. within 90 degrees of azimuth of each other.  Therefore, a significant systematic error, e.g. 3 minutes of arc of unrealised instrument error, not uncommon in a 70 year old non-professionally calibrated bubble sextant or when using a mirror artificial horizon, might well place the symmedian point of the triangle you’ve observed outside the triangle caused by random errors alone, see below.

Had you considered using a sandwich fix from three suitably placed stars?  Last night would have been ideal here.  We had gin clear skies until 23.00.  You could observe A,B,C,B,A over ten minutes using a single mid-time for the calculation.  Using a different bubble sextant from three different windows would save time setting up between observations, but deciding whether this would be beneficial or detrimental to the error distribution might tax even the brain power of a Professor of Errors from Cambridge University.  One glutton for punishment actually designed a form for recording a three star sandwich fix, and the RAF chose to reproduce it, see below.  I never met anybody who used it. Most people were content with two star sandwich fixing. DaveP 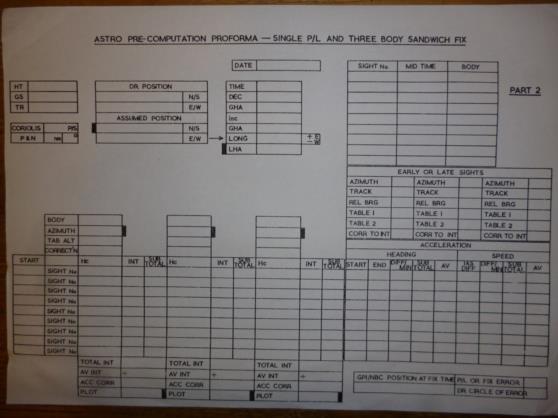 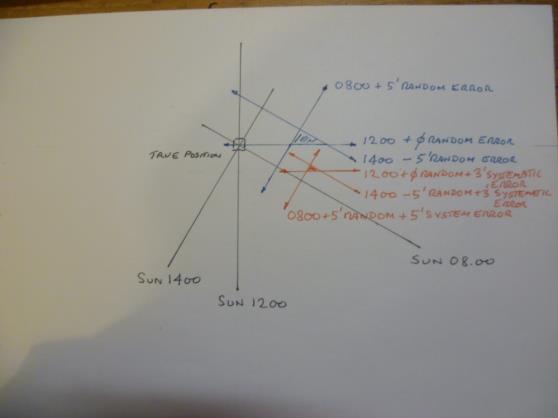