The equinox occurred today, a little less than six hours ago, as I write this at 13:30 UT, and in fact, very close to 13:30:00 UT (UT1*) exactly. As you can see in the computed values below, at that instant of time, the Sun's true azimuth was more or less due north by a negligible fraction of a mile from the nominal subSun point. One second earlier or later finds the azimuth nearly due east or due west. My various web apps are generally accurate to the nearest second of arc, so these numbers would differ a little from any app that goes beyond that level of accuracy.

A reminder: for a month or so near either equinox, the rate of change of the Sun's declination is very nearly one minute of arc per hour. In other words, it is travelling south right now at one knot. It is also rocketing to the west at 900 knots. Unless some divine force intervenes to stop it, the Sun will continue its spiral down to the south and reach the south pole in early May. If it reaches the south pole, it will get stuck there forever. I call on everyone to pay tribute to the gods in order to stop this dreadful southerly progression!!

If you're not sure how to pay tribute to the gods, it's done by making a donation for NavList Operations. I haven't asked in over a year... 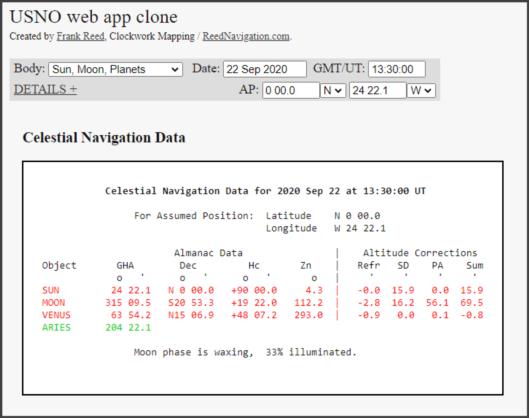