I asked where on Earth you could see Orion like this, with Mintaka and Betelgeuse at the same altitude and Bellatrix below them, close to the horizon: 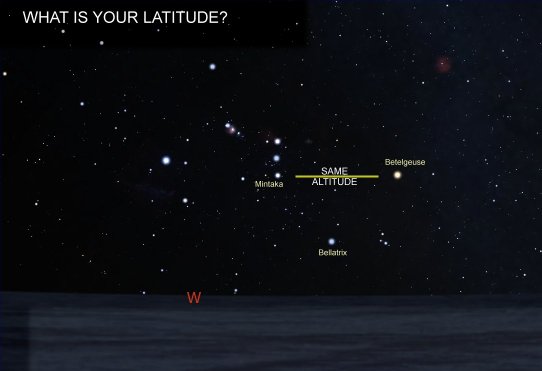 As I noted in my message last night, both Stan and David C got it just right. The best answer would be 35.4° S, just four miles from Stan's estimate. The uncertainty in this latitude determined this way would be substantial. If you imagine Mintaka as the center of an analog clock dial, and if you draw a clock "hand" from Mintaka up to Betelgeuse, then the angle, θ, that hand makes above the horizontal gives your latitude directly,
Lat = θ - 35.4°.
This is for the case when Mintaka is around 10° high. Unless you have an accurate altitude measured, uncertainty in the altitude would throw in about a degree of uncertainty in the latitude. For comparison when Mintaka is right at the horizon, the relationship is
Lat = θ - 36.8°.
There is additional uncertainty simply because we have no means to measure that angle from Mintaka to Betelgeuse directly. With a protractor and a plumb bob, it might be possible to estimate that angle to the nearest degree, or by pure visual estimation, the angle might be estimated to within 3 degrees. And that's basically the limit on this process for estimating latitude. It would give you a rough guess, a starting estimate for latitude that could be used if no DR latitude whatsoever were available. A navigator with a sextant would get much better results, accurate to perhaps five miles, simply by measuring the two altitudes. For "lifeboat" or "primitive" navigation, a latitude this accurate might be good enough to get an observer to the point where you could look for other signs of land, like birds, currents, and so on.

So where does this come from? I said this was in a movie. In my first post on this topic, I included one additional hint, closing my post with a line from a song:
"at night we name every star... we know where we are".
That's a line from a song written by Lin-Manuel Miranda. If you haven't heard of Mr. Miranda, he is the creative genius behind "Hamilton", the Broadway blockbuster of the past two years. He's also a graduate of Wesleyan University, some 20 years after I graduated from there and a few more years after Hewitt Schlereth also graduated from Wesleyan. As you can imagine, a song from the mind of Lin-Manuel Miranda does not come cheap, and the film studio that hired him to write that song about naming every star and knowing where we are has some deep pockets. It's Disney. And the movie in question: Moana.

I managed to arrange a private showing of Moana at a local theater on Monday night. It's a wonderful, beautiful animated film, targeting children but also warm and funny and appealing to adults. It's Disney bringing their "A game". Moana is a story of "wayfinding" which, like the double meaning of navigation, implies either sailing and exploring, or it means finding your position. In the latter sense, there are some brief nods to the modern techniques of indigenous Polynesian celestial navigation created in the past forty years by various people primarily in Hawaii. There are many beautiful star-filled skies in the film, but most are imaginary starfields, evocative of a gorgeous starry night but not attempting to portray real constellations. There is one exception: for a few seconds, we see Orion on-screen, and it is rolled over, compared to the view we normally see in the northern hemisphere, to the point where Mintaka and Betelgeuse are almost exactly level. We see a Polynesian navigator holding up his hand apparently "measuring" that orientation of the stars. Given the implied latitude, around 35° South, we can narrow things down even more since we know we are in the Polynesian cultural area. That latitude is a long way south, much further south than nearly all Polynesian islands, and in fact it almost certainly implies New Zealand (or the Chatham Islands). So now "we know where we are". Those few seconds showing Orion were my only opportunity to satisfy the "inner nerd" during the movie, and I don't want anyone to get the impression that this is a film about traditional wayfinding. There's more about coconuts than navigation here. Moana is about a girl "finding her way" and a demi-god helping her out and the two of them (plus one very stupid chicken) saving their island and their world. If you can "find a way" to see Moana on the big screen, I recommend it. And don't blink during the big musical number twenty minutes in. You just might miss latitude by Mintaka and Betelgeuse!