A local marine archeology organization, RIMAP, here in Rhode Island is making news again. They've completed some research which confirms their prior historical analysis showing that James Cook's vessel Endeavour, renamed Lord Sandwich, was scuttled by the British about a quarter mile offshore from Newport, RI in 1778 in an attempt to block and defend a small fort and gun battery during the American War of Independence. This is a location just visible out the window from my apartment. It's off the "Point" neighborhood in shallow water between the Pell (Newport) Bridge and Goat Island. Apparently RIMAP will be holding a press conference on Wednesday to discuss their continuing research and to solicit funding for more marine archeology and a conservation center. They do seem to have better reason to believe that they may be able to state with confidence that one of the debris fields they have found is probably the remains of Cook's Endeavour, but it is also true that positive identification may never be possible.

RIMAP is a small, amateur club, and they have a rather frumpy website. You have to dig a bit to find useful information. So far, the best spot that I have found with details of the debris field locations is here. Note that's there's a section near the top of that long-ish page describing the analogy between James Cook and the sailing vessel Endeavour and James Kirk and the starship Enterprise. It's a legitimate comparison and not accidental, by the way, but if it seems frivolous, just jump over that and get to the archeology and history!

Note that Cook's later vessel Resolution also apparently ended its days at Newport c.1793, less than a mile from the final resting place of Endeavour. Strange but true. In the small chart below, modified from an 1864 nautical chart, I've marked the estimated locations of the remains of both vessels. Note that the cove where Resolution rotted away was filled beginning in the late 19th century. There's a little Irish-American bar called "Celtica" there now where I have been a few times, and it's quite possible that I've had a beer right on top of the remains of Cook's Resolution. 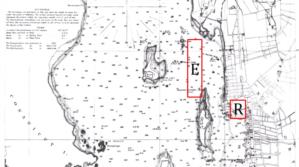