An update on the 8 day Thommen aircraft dash clock as a good enough mechanical chronometer. After 4 months of accurate running the repaired Thommen 8 day clock stopped for good :(( The movement was removed and partially disassembled until a broken gear shaft at a jewelled bearing was discovered. The broken clock has been retired for parts and a similar Thommen has been purchased as a replacement. This time a Thommen aircraft clock described to be in great working condition was obtained on Ebay for $125. The replacement clock is identical to the original except for an ETA feature built into the dial crystal. This I'm guessing is to give a pilot quick time to arrival information.

Now the rating of the replacement begins. Hoping for 5 seconds per day or better. 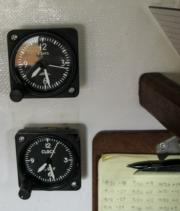 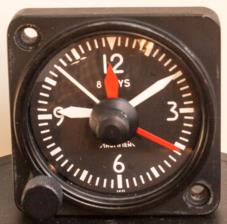