The simplest and most reliable instrument in an airplane is the magnetic compass. Although it might be easier to steer by the gyrosyn compass, the simple magnetic compass should have been the standard to rely upon.

When the navigator couldn't get a star to "line up" he had to know that he was doing something wrong and should have started over again and checked everything.

You check the deviation and variation in flight by measuring the azimuth to a star ( commonly the north star since the computation is easier) and compare the reading to its computed azimuth for the time and at the fix or dead reckoned position. Of course, for this to work, you must be sighting on the star that you computed the azimuth to. This "navigator" apparently accepted any star that showed up in the field of view of his sextant as being the correct star. I have attached a page from AFM 51-40 showing how this is done.

The field of view through a periscopic sextant is limited so you have to be careful identifying the correct star. Since the normal procedure is to precompute the azimuth and altitude before taking sextant shots in flight the navigator then sets the precomputed altitude in the sextant and turns the sextant to the proper azimuth and the correct star should be found in the field of view. You then complete taking the shot. He had plenty of warning bells going off when he couldn't get some of his fixes to work out because the stars didn't line up.

I have attached some pages from the Air Almanac which has diagrams of what the pattern of stars should like like when looking at the navigational stars through a periscopic sextant to aid the navigator in selecting the correct star in the field of view. I don't know if these diagrams were available in the Air almanac in 1952. If they were, then the navigator should have noticed that the stars he was sighting on didn't match the pattern and so should have known he was sighting on the wrong stars. If the diagrams were not available then the navigator should have been even more careful in identifying the correct star.

I'm not too impressed by the performance of the captain either. He should have insisted that the navigator get a good fix after he discovered he was off course and then taken appropriate action based on the new fix.

Look at the chart on page 15 first and the guts of the navigation is on page 8. 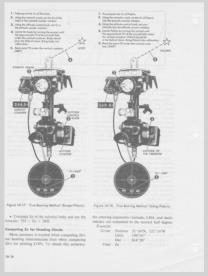