I was talking with Greg Rudzinski the other day about Amelia Earhart’s navigation from Natal to Dakar
near the beginning of her flight around the world. Although this leg took place well before the flight from
Lae to Howland it has been seen as relevant in unraveling the final mystery as it shines light on the
interaction between Earhart and Noonan.

They departed Natal, Brazil at 0615 Z on June 7, 1937 for Dakar and landed thirteen hours and twelve
minutes later at 1927 Z in Africa but at Saint Louis, about 163 SM north of their planned destination.
Amelia explained it this way:

“When we first sighted the African coast, thick haze prevailed and for some time no position
sight had been possible. My navigator indicated that we should turn south. Had we done so, a
half hour would have brought us to Dakar. But a "left turn" seemed to me in order and after
fifty miles of flying along the coast, we found ourselves at St. Louis, Senegal.” (Last Flight, page 119)

Of course the reason the Dakar story had relevance to the final
disappearance is that it offered an explanation for why they were unable
to find Howland. It seemed likely, at the end, that Earhart refused, as she had done on the approach to
Dakar, to follow Noonan's advice on the heading to follow that would have taken them the Howland.

I have attached a portion of aeronautical chart ONC K-0 depicting Dakar and St.
Louis which I think will be of interest. I have also attached the chart used by Noonan on this leg (it is now
at Purdue and I had the librarian there scan the chart for me.)

When I first heard the "I turned the wrong way when hitting the coast
of Africa" story, I assumed that the coast, at that point, ran in a
straight line so AE could reasonably question which side of Dakar they were actually on.
Now, however looking at these charts, it is impossible to believe that
story. The coast north of Dakar trends 040º T while south it trends
320º T, a difference of 80º, almost a right angle. All she had to do
was point the plane along the shoreline and look at her compass. If it
said about 058º (allowing for 18º of west variation) she was north of Dakar and
if 338º she was south. No way to mistake this, there was no possible ambiguity.

I think, for whatever reason (maybe better service available from the Air France
facility, personal contacts, etc.), they made a conscious decision to
go to St. Louis and crossed the coast line southeast of Dakar and
proceeded overland to St. Louis. AE writes in "Last Flight"

"At St. Louis are the headquarters of Air France for the
trans-Atlantic service, and I was grateful for the field's excellent
facilities, which were placed at my disposal."

Elgin Long thinks that they aimed directly for Dakar and that they passed west of Dakar and then turned
east and hit the coast as Earhart said but there is a problem with his theory, namely the 1800 Z LOP.
Most significantly, to the question of whether they accidentally missed Dakar, you can see on Noonan’s
chart that there had been a sun line that ran to Dakar on an approximately 21º T course but this line was
erased (but still visible) and the sun line was advanced to 1800Z to run to Saint Louis. This confirms what
I have been saying, that they deliberately hit the coast south east of Dakar and then deliberately flew to
Saint Louis. It's no coincidence that the 1800Z sun line runs directly to Saint Louis. and that the parallel line
to Dakar had been erased.

We can tell that this sun line was not from an observation taken at 1800 Z since if it were the azimuth would
be different. The original sun line was taken at about 1625 Z and is the line running 21º which is to the west
of the parallel 1700 Z line. We know the time of this observation (it is not exact but within five minutes) by
the azimuth of the line and the distance on course that the plane traveled between this line and the same line
advanced to 1700Z. If you extend the course line back from the 1800 Z position though the 1700 Z
position until in intersects the 1625 Z this line you can measure 78 NM (88 SM) and based on their ground
speed this would take about 35 minutes placing this earlier sun line and sun observation at about 1625 Z.

In addition, since this flight clearly shows why one would not aim directly for such a destination but would
aim off to the southeast to hit the coast, Air Force Manual 51-40 uses a flight from Natal to Dakar as the
example of how to plan such a flight. (I have attached an excerpt from this manual.)

Ric Gillespie agrees with me that they struck the coast southeast of Dakar but
he comes up with an explanation that doesn't make sense for their failure to just follow the coastline
northwest to Dakar since the easiest thing to do in hazy conditions is to follow a coastline! We may never
know the real reason that they chose to go to St. Louis but it was an
obvious decision that they had made to fly overland instead of following the coast.

The bottom lime is that the Dakar flight provides no help in explaining the final disappearance. 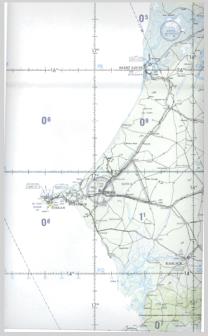 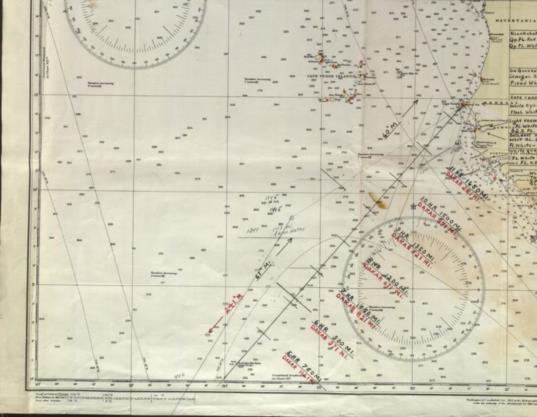