Thanks to all the contributors to the Doniol and Long Term Almanac project, it's really very satisfying to use.

And a source of stimulation for use when a little bored on passage.

And useful ( I hope and expect ) for mathematical offspring on passage on the boat who 'want something to do'.

The recent list activity re LTA Table 4 has flushed me out. For my own use I've put together a worksheet on one side of squared paper which uses the published Long Term Almanacs ( for both Sun and Aires hence stars ), with Doniol for Hc and Azimuth sight reduction.

On the worksheet the shortform multiplication routine is expressed in a way that saves space; 3 digit long division fits on the paper for the Azimuth calculation; I'm using my own separate list of the brightest 20 stars I might use where I sail, the SHA recorded for mid Summer which stands OK in the total error budget of, say 1'; in normal use the sun corrections are simplified to an SD of 16', then star Refraction corrections used.

One of the most satisfying things about using Doniol is the feeling of scale that automatically comes out of the Haversine method. Crudely speaking, the Hav function is linear(ish) from 0 to 180 Degrees, that is 180 x 60 = 10800' and more roughly again 10000', while the four figure arithmetic is scaled from 0 to 9999 more roughly 10000 also, so at the end of the calculation, .0001 in the Haversine is roughly equivqlent to 1' of arc. It's the first time that I've noticed this rough equivalence, and I'm delighted with it. 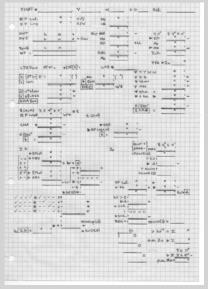 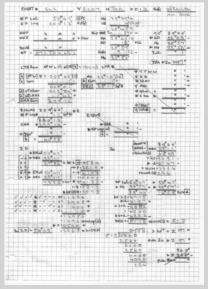