Reply
Re: Does anyone use a stopwatch on the handle?
From: Wolfgang Hasper
Date: 2014 Oct 22, 17:47 +0200
Hi all,
I still think it would be great to have a stopwatch that can, upon push of the button,  simply freeze the display of an ordinary real time clock.
You could then take all the time you want to copy the sight's time directly (in UTC, if you like to set the clock accordingly) and avoid the hassle and potential errors involved in obtaining sight time from stopwatch reading plus clock reading...
Should be so easy to make, but seems like such an "absolute stopwatch" is unknown on the market.
regards
Wolfgang
Gesendet: Dienstag, 21. Oktober 2014 um 20:46 Uhr
Von: "Greg Rudzinski" <NoReply_Rudzinski@fer3.com>
An: wolfgang.hasper@web.de
Betreff: [NavList] Re: Does anyone use a stopwatch on the handle?

I prefer using the stopwatch held in the palm of the left hand so that the index finger can stop the watch with the thumb and middle finger used to turn the micrometer. See image. The stopwatch is agreat way to preserve time and useful during twilight periods when a wrist watch would be a difficult read. 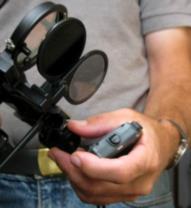