I use an app called "GPS Status". Among its many features is one which identifies which satellites are contributing to your current location fix. From the "help page":

Another interesting feature is the ability to locate the detected satellites. In the attached screenshot, you can see a green circle around a satellite represented by a disk and labeled as "3" (not exactly centered on the satellite at approximately the 12 o'clock position of the radar-type dispaly). You can also see that the top of my phone is tilted about 14° upward in elevation (from the screen being level), about 2° to the left and at a heading of about 38° (with what I presume to be a fair amount of interference from my nearby laptop and other sources of magnetism). That means that the top of my phone is pointed [roughly] in the direction of that particular satellite.

You can also see that my phone is only using satellites from the GPS and GLONASS constellations, as there are only "disks" and "rectangles" on display. FYI: this is a Samsung Galaxy J7 [SM-J727U].

NB: The displayed altitude is not very accurate - which is to be expected. 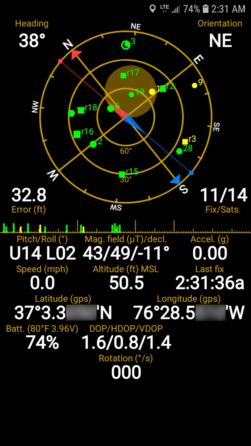