Reply
Re: Do you Beidou?
From: Brad Morris
Date: 2019 Dec 18, 22:24 -0500
My receiver detected standard GPS satellites in addition to Glonass satellites.  No other systems were detected, specifically Beidou.  Nor were any Galileo satellites detected.
I wonder what a receiver does with garbage data.  Suppose, for example, the Galileo, Glonass or Beidou information directly conflicts with the standard GPS data.  Not so far fetched a concept, as recently, the Glonass data upload was mismanaged.
Brad
On Wed, Dec 18, 2019, 9:33 PM Robert Wyatt <NoReply_RobertWyatt@fer3.com> wrote:

This prompted me to see what might be available for iOS... and I found GNSS View. It includes an AR (augmented reality) sky view with the present satellites.

The Chinese GNSS (GPS-equiv) satellite constellation, Beidou (pronounced roughly like "Bay Dough") is now complete and should be declared operational fairly soon: https://spaceflightnow.com/2019/12/16/china-completes-core-of-beidou-global-satellite-navigation-system/. So can you receive the signals? There's a fairly good chance that your smartphone is receiving signals and processing them into your position fixes already. Mine does not, but some other phones do. To test this on an Android phone or tablet, I suggest an app called "GPSTest". There are a number of apps with similar names, so follow this link to the Google app store: https://play.google.com/store/apps/details?id=com.android.gpstest. Look for the screen that lists satellites with flags, as below. 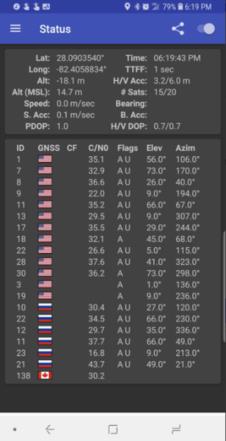 
View and reply to this message