So you have measured the angular height of the mainmast of the SS Botany Buoy above the horizon. As I have said, you know the height in feet from waterline to the top of the mast. It's 105 feet (sorry, yes, feet... but I promise I will provide the final results with a metric option). Your own height of eye is 9 feet.

With your sextant, you measure the angle from the sea horizon to the very top of the mast and get 5.3 minutes of arc, with index error zeroed out. This can be measured with good accuracy and repeatability assuming we have a scope with good magnification. I mentioned a 7x scope in my first message. This sextant angle is the key observation, but it turns out the analysis is simpler if we switch to an observed angle above the true horizon. In other words, we subtract the dip. For now, I will stick with the standard mean value for dip, but we'll have to come back to this later. The mean value for dip for a height of eye of 9 feet is 2.9'. Thus the angle oif the top of the mast above the true horizon is 2.9'. We'll call that alpha, α.

At this point we have the angle above the horizon, but to get the total angular size of the object we also need the angle below the true horizon, call it beta, β. The sum of those, the total angulae size is directly proportional to the size of the object divided by the distance, and for angles "in radians" or as pure ratios, it's a simple equality:
(total angular size) = α + β = (size / distance).

How do we get β? In a scenario like the one I have set up, where I claim that our castaway is familiar with the vessel, we might just estimate it by the appearance of the masts. Even without being familiar with this specific vessel, any observer can estimate from the rig that there is a particular type of hull below those three masts. It's not a surfboard. It's not a container ship. So we might fairly estimate the total angular size to be approximately 6.5'. From there the calculation is trivial: (6.5' / 3438) = (size / distance) and with size=105 feet, the distance is 9.1 nautical miles. But in general we can't estimate the "hidden" angle, and we don't have "x-ray vision". Instead we have to know something about the geometry of that angle, and with a little algebra we can deal with the general case.

We need to know this "drop-off" angle, beta. Draw yourself a plane triangle, and you should be able to convince yourself that you an observer close to sea level, the angle to the "foot" of some object at some distance away, beyond the horizon is just the distance as an angle, let's call that gamma, γ. Note that the physical distance in miles is the radius of the Earth multiplied by gamma: distance = R·γ. The "drop-off" angle, beta, is simply one-half of gamma:
β = γ / 2.
For example, from here in southern New England, the great circle distance to Bermuda is just about 10°. That means that if I want to aim an arrow in my backyard to point at Bermuda, it should be tilted down at an angle of 5° (and aimed SSE). This simple relationship is not an approximation for small distances. It applies up to the antipodes. If you want to "look at" the point on the globe whose distance is 180° away from your in great circle distance, then, of course, you look 90° below the true horizon --straight down. Just another special case of β = γ / 2.

We can combine these two relationships. Remember our goal is to get the distance of the object so we're trying to solve for gamma, which is found in both of these relationships. Let's replace beta in the first relationship by its known connection to gamma from the second relationship. That yields:
α + γ / 2 = H / (R·γ).
We're almost there. The angle alpha is known from observation. It's the sextant angle minus the dip. We have to assume we know H, and the radius of the Earth, R, is also known. The only unknown in this equation is the angular distance, gamma, and that's what we're solving for. But gamma is in the numerator on the left side and the denominator on the right. We have to multiply both sides by gamma. The result, reorganized, is
(1/2)γ2 + α·γ - H/R = 0.
That's a standard form quadratic equation, and we can solve it using the equation you learned in middle school. The result (taking the positive root) is:
γ = -α + sqrt[α2 + 2(H-h)/R].
I have changed H to H-h here. I'll leave that as an "exercise for the reader" :). And finally the physical distance would be:
D = R·sqrt[α2 + 2(H-h)/R] - R·α.

I have spelled all this geometry out again in the attached diagrams, which I hope will help. Next up: a little diversion into Bowditch, and then we have to change one little number to account for refraction. :) 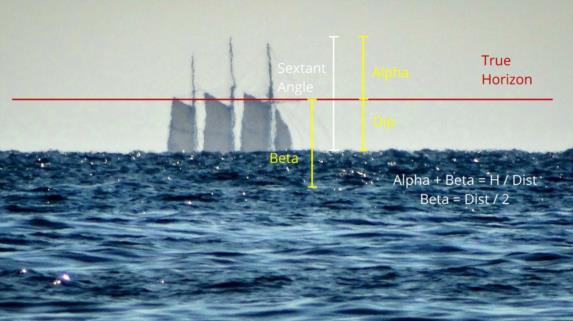 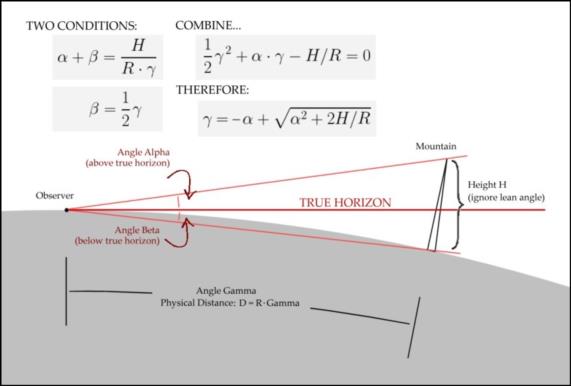