Many thanks for drawing attention to Shufell's paper, which has much more of interest than just the dip meter, including the use of sextant telescopes with very high (x16 or x20) magnification and having 50 mm objectives with mirrors to match. On my voyage last year, I used a 7x 30 monocular all the time, because it allows better judgement of the point of contact of the body with the horizon, as well as giving a better view of the horizon in poor light conditions than the x4 Galilean supplied with the sextant. Tamaya went so far as to fit some sextants with 7 x 50 prismatic monoculars (I have two such sextants and have had satisfactory sights from a 14 ft dinghy). Mention is also made of front surface index mirrors, like those used in the SNO-T and in the horrible Plath Navistar Professional and of the visual acuity of the observer, who need not necessarily be the navigator. Some rare individuals have acuity of 6/4, which means they can see at six metres what a normal person can see only at 4 metres.

I imagined that the dip meter would be based somehow on the Blish prism, as described in the first edition (but not the second) of A.J Hughes's "The Book of the Sextant",Glasgow, 1915. (attached) Shufell's paper unfortunately hardly enlightens me, except to show that there are two prisms and a micrometer in a frankly amateurish sketch of the mechanism. Quite how they are disposed and where the telescopes fit in is very unclear, so I should very much like to have a copy of the Russian account of the meter. As my studies of Russian have not advanced beyond chapter six of a student's text I hope you will be able to help out when my dictionary fails.

You write:
"If I had a home workshop like Bill Morris, I would certainly attempt to
make one:-) Does not look super-complicated: two prizms a micrometer
screw and an arc of just few degrees."

This reads like a challenge that I may well take up when I return from an overseas trip at the beginning of June, provided that I can see a diagram with enough detail to allow me to reconstruct the dip meter. Meanwhile, I would like to suggest that if any member has a theodolite, it could be used to estimate the dip of the horizon. I sometimes observe the sea horizon from the top of a low cliff of unknown height, but have used a thedolite to estimate the dip as about 8 minutes. It is a little too far for me to make frequent observations, but I daresay I could one day pack a picnic and see how dip varies during the course of a day. 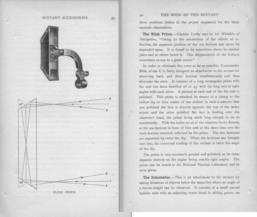