I continue to read about Lunars history and technique and their eventual demise by affordable chronometers. More than 75 years lapsed between Harrison's invention of H4 and the availability of affordable chronometers for commercial ships. In the meantime, Lunars filled the need for longitude. There is a lot to be said for Lunars.

By happenchance, my local library's e-book catalog offered "From Sails to Satellites:  The Origin and Development of Navigational Science" by J.E.D. Williams, Oxford: Oxford University Press, 1994.  So I picked it up (a lot has happened in navigation since 1994 but my interst was 18th and 19th century).

Williams argues that chronometers were the first devices to introduce economics and cost/benefit to navigation. This is quite an assertion and though simplistic, is an interesting statement about navigation.

In "Chapter 15 - On the Price of Annuities" he states "During the centuries in which commerce impelled navigation, it involved little capital investment."   ...  "astronomer Edmond Halley invented actuarial science and created the basis of investment analysis ... and described precisely the correct method of assessing the cost effectiveness of a navigational system."   [p.283]

I can not say if what he says about Halley is true or not but later in the chapter Williams continues his line of reasoning ... "Nearly a century was to elapse before the high cost and great benefit of the chronometer first raised the question of the cost-effectiveness of a navigational instrument." [p.286]

It seems to me an entire industry had to be created for chronometers - manufacturing, sales, distribution, maintenance.

In Chapter 16 - Past, Present and Future, he restates his case "It was the chronometer which first introduced economics to navigation. Its high initial cost discouraged it usage for decades." [p.293]

For me, Williams is the first author I have read that states a particular invention, chronometers, introduced economics and cost/benefit to navigation.

Could this assertion be true? 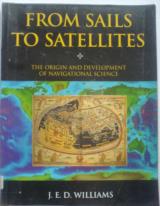