Not just the HP35, but the array of electronic calculators during that era served to put an end to tables.  Other than special purpose, large cylindrical slide rules, no other method than tables gave good results.  Any electronic calculator changed that, even if you had to look up sin/cos/tan in a trig table.

It is 46 years since the HP35 went on sale. That means that there is a generation and a half who have never had the pleasure of performing calculations without electronic assistance.  I tend to think of the arrival of civilian GPS (1990s?) as the beginning of the end of CN.  In fact "traditional" CN began to die in the early 1970s.

Handwriting is probably another skill that will soon be lost. In NZ recently concern was expressed that school students had to write lengthy exam essays long hand. It was pointed out that in normal life the students used keyboards. Soon some will probably fail the exam because they cannnot handwrite. I have seen reports that some millenials cannot read analogue clocks.

To be fair to the students I can remember writing exam answers with a fountain pen but I am sure that I would fail if I tried to write this post with "joined up writing". Nothing beats a keyboard!

I have attached a photo taken recently at the Wellington cable Car Museum. Surveyor James Fulton lived from 1854 until 1928 so it is possible the slide rule was used for astronomical calculations. But I do not know. Land Information NZ (LINZ) is part way through a project to digitise many thousands of North Island field books from the 19th century. When the books become available to the public I would like to search some of them for astronomical observations. I have already identified one book that I am very keen to view in relation to another research interest. 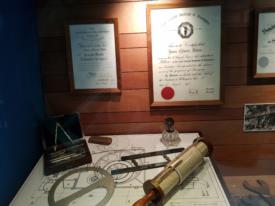