I'm attaching here a little pamphlet entitled Further Remarks on the Present Defective State of the Nautical Almanac. This was written by Francis Baily and published in 1829, five years before a major revision of the Nautical Almanac. It includes some interesting anecdotes and details. For example, only about 7,000 copies of the official Nautical Almanac were sold annnually. Meanwhile "copyright-busting" American reprints from just one publisher, probably Edmund Blunt (the man behind Bowditch), amounted to some 12,000 copies. The author advocates many changes to the almanac. It's interesting that he suggests adding better tables of the bright planets so that they might be used for latitude in daylight, and he tells a story of latitude by Venus aboard an American packet ...see below. Plenty of interesting reading... 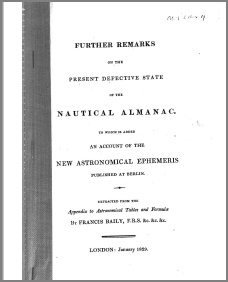 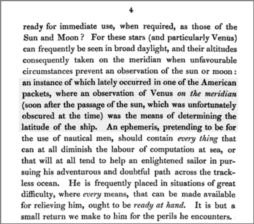