Some thoughts on this subject:

What is the Mercator projection? Originally, and most importantly, it is a nearly global projection of the Earth's surface (or the surface of any globe). It has two key defining properties:

As a result of the above defining properties, the projection has some other well-known properties:

The standard near-global Mercator projection became the basis of schoolroom maps of the Earth. This was largely an accident, a default choice. As cartographers recognized the folly of teaching geography from a Mercator projection and realized that it introduced significant biases, global maps were published using numerous other projections during the second half of the twentieth century.

Google adopted the standard global Mercator projection in the early 21st century. This was almost certainly an accident, an error committed by software engineers who didn't know any better. They had seen it in school, so it had to be good, right? This poor choice unwound most of the work done by those poor cartographers in the last few decades of the 20th century. Mercator came back big-time, and it will be around for a few more years, thanks to that unfortunate decision made in Silicon Valley back in 2005.

Are universal plotting sheets Mercator projections? Many of them are labeled Mercator. Even examples from respected sources are often labeled as "Mercator Plotting Sheets". The only property that they have that can be compared to the standard Mercator projection is "conformality" (and for plotting sheets, it's not even a necessity). Conformality in a map projection means that shapes are preserved, specifically angles. So if I have four buoys anchored in my local harbor, and they are arranged as a square, with 90° angles and equal-length sides, then those buoys will be plotted as a square in a conformal map projection. This is just like the simple property in geometry of "similarity". The mapped shape is "similar" in that geometric sense to the actual shape in the real world. But almost any map projection is conformal at least in the vicinity of some key point. You could label a universal plotting sheet "Gnomonic about central point" and it would be equally true. A plotting sheet is a "patch" map, not a global mapping projection. There is nothing genuinely "Mercator" about a universal plotting sheet. Universal plotting sheets should never have been identified as Mercator. We either have to accept that this was simply an error in labelling all these years (and the resulting errors in understanding), or we can decide that the meaning of the label Mercator has been changed and now means to navigators what "conformal" means to all other map users. That's a possibility, but I would say a bad excuse.

If these projections are Mercator "in name only" or only in a mathematical sense, then why did such charts become popular? When and why did Transverse Mercator become so popular in specialty applications, including in US military mapping after the Second World War? That I don't know. It's an interesting historical bit of trivia that would require some tough research. I'll speculate that it was an easy sell to "brass" --a familiar name with a modifying adjective.

Why did Google finally change the map projection in Google Maps ...just a few days ago? Were they atoning for the ancient sin they committed so long ago ... in 2005 when they first launched the product? Were they thumbing their noses at flat-earthers as so many internet commentators would like to believe? Both of these are unlikely possibilities.

The biggest change since 2005 is the substantial increase in computing power in all devices and especially the rise of separate GPU capabilities (chip-level graphics processing primarily for scene-rendering in simulated environments). Thirteen years ago, recalculating a map projection in every view and while scrolling a live-view was prohibitvely expensive. Now it's easy... So why not just roll the globe around? This is still a map projection, and it's an ancient one. The difference today is that the central point of projection can be "dialed" or scrolled to any location in an instant. It's an infinite number of global map projections, ready when you are.

The other sensible reason for changing the map projection derives from another change made gradually several years ago when the "satellite view" (really mostly aerial photography) function in Google Maps was replaced by a Google Earth-based viewer tool. This change provided consistency with the vast Google Earth project, but it left a lingering problem: when alternating between standard "map view" and so-called "satellite view" there was a noticeable, jarring jump in wide view maps. Google Earth has always used a simple perspective projection or "astronaut's eye view" which did not align with the old Mercator projection in Google Maps. Now Google Maps is using nearly the same projection (and yet oddly, not identical). This allows a more seamless visual transition between the two views, though surpisingly there are still differences. That may be because the change in the map view is less than two weeks old, and they haven't worked out the kinks yet.

We can see in the images I've attached below two lingering "hangovers" from Google's "Mercator Era". One is a global chart which popped up as a display bug just yesterday. The other is a hole in Antarctica demonstrating that the map database is still constrained by the limits of the former Mercator projection even when displaying the new projection. I would bet that this will be fixed within a year. 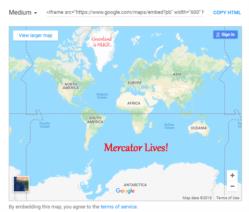