I decided to take Amundsen literally and see if it was possible to use the top surface of ‘dark glass’ for a horizon.  I bought the darkest piece of welder’s facemask glass I could find for £1GBP.  I laid it on top of my original plate glass horizon with a piece of mat black card in between and placed a circular level on the top (see Photo).  I actually bought two glasses in case I had to roughen up the rear of one, but this proved unnecessary.  I chose to simulate Amundsen’s situation as closely as possible by using my small mirror Hughes Mates Three Circle sextant and to observe at roughly the same altitude of the Sun.  I calculated that on the Sun’s declination was around 23 degrees south and, because the PZX triangle becomes a straight line close to the Pole, the Sun’s altitude would be similar.  This meant I had to observe in the UK today at around 10.00BST.  The first series of observations averaged 32 nm towards, but then I remembered that in my enthusiasm I’d forgotten to level the glass.  After doing this, the intercept reduced to 6 nm towards.  Next I removed the black card, which wasn’t entirely flat.  By this stage the images were boring a hole in the back of my eyeball, partly because I could have done with an extra horizon filter, partly because it was taking ages getting the Sun onto the dark glass, partly because I was having difficulty deciding which image was which, but mainly because I’ve not had a lot of practice with the marine variety of sextant.  Therefore, I only made one more observation, which gave me 2.1nm towards.  I believe that with greater care and practice, and possibly sunglasses, I could get this down to around 1nm.  DaveP 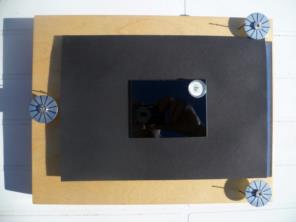