Work on the celestial globe is progressing.  I sanded the globes as near a perfect sphere as I could.  So far, I’ve painted them with one coat of matt white.  So that I could hold them for painting, I turned them into lollipops.  I stuck them on a bottle top using ‘Blu Tack’, so they’d separate easily.  I painted the covered bit later by sitting them on a jar top.  I’ll only use a second coat if I need to increase the diameter a touch or I mess up drawing the grid first time.

The circle cutter arrived yesterday one day early.  After a liberal does of 80% bio ethanol so I could use it straight away, I started experimenting on spare card.  I found 100mm diameter as marked on the cutter was a fraction too small for the globe to go through, so more experiments today.   I think it will be better to use a smaller piece of card, and keep the cutter still moving the card in a circular motion under it.  Then it'll be glue guns at dawn.  More later.  DaveP 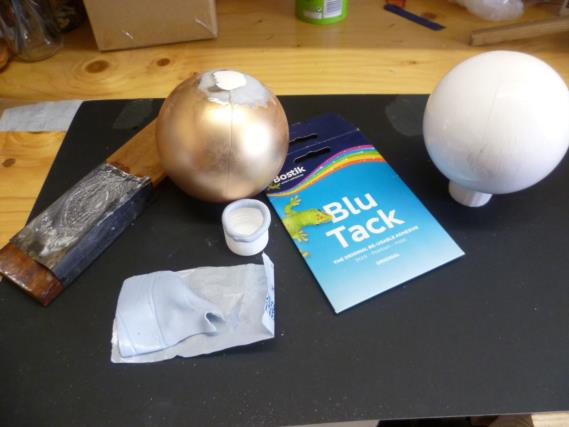