Brad Morris, you wrote:
"There are many other things you can play with, like adding altitude lines for astronomical, nautical and civil twilight.  So you turn it into a sunrise/sunset calculator.  Of course, you have to be able to plot the sun to do that.  Some versions I posted have that facility."

Yes, this is a great addition, and it's something that Gary LaPook and various others (me included) have suggested, too. Point being that there's lots of agreement that this is a good idea, worth the effort.

You do this by adding simple altitude "arcs" for -6°, -12°, -18° for civil, nautical, and astronomical twilight respectively, or just one or two of these depending on your interests. These do not need to be, and for clarity probably should not be, complete altitude circles extending the above-horizon coordinate system down to negative altitudes. Rather they should be limited arcs at those altitudes below the horizon extending over that range of azimuths that is possible for the Sun at those altitudes in your latitude. Then to use these, you need an ecliptic with the months and perhaps 10-day tick marks printed on your base star map. It's also a good idea to include some hint of the foggy band of the Milky Way, since under dark skies, this can help with orientation, and certainly constellation lines for the more obvious official and un-official constellations (Big Dipper, e.g.). There are public domain sources for all of these things, but it may take some work to scrape together the right sort of elements for a planisphere of a given size and symbol density. In other words, you need to find those constellation lines with enough detail to be meaningful, but sufficiently simplified so that the printed base map is not too cluttered.

I modified an inexpensive commercial planisphere by adding altitude-azimuth coordinates (printed from a variation of Brad's spreadsheet). Note that this particular planisphere design has a neat trick for avoiding distortions by using both sides of the base star map disk. This also would make it easy to swap out the latitude-specific "folders" for every 10° of latitude. Do that, and in very little time you have a nice modern star finder that ditches the numerous well-known problems with the weird "official" navigator's star finder, known as "H.O. 2012-D". And if you replace the 2102-D with a better star finder, modelled like this one on a commercial planisphere, you avoid the terrible horror of "Plan 2102-D from Outer Space"... As I have said before, The idea of a "star finder" is a noble one, and we have many successful options ranging from traditional planispheres to the neat little charts in the Air Almanac to phone apps like Google Skymap (or whatever they call it now). The problem with the H.O. 2102-D is that it is an abomination, the cunning and rude work of Satan himself, a seductive spell cast by the Hydrographic Office that lures navigation enthusiasts into the dark hell of the shadow arts. No really, it is! And I can prove it: 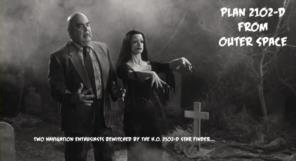