D.H. Sadler had strong opinions on matters of time. And some folks in the 21st century with similarly strong opinions on time (a pox in that leapsecs group) quote him like a messiah. From an appendix to his personal history: "[Sadler] had done much to clarify the concept of ephemeris time and its relationship with universal time, or Greenwich Mean Time as he would have preferred to call it. He was a staunch, but unsuccessful, opponent of the introduction in 1972 of the new system of Coordinated Universal Time (UTC), and is said to have worn a black tie in memory of GMT whenever a leap second was introduced."

Sadler was also the driving force behind a museum exhibit on "longitude by lunars" that sounds like a good idea --if you ignore the realities of education and educational experiences in museums-- but was in fact largely a failure in the execution. It became identified with Sadler's personality and was known as the "sadlerium". I had mentioned this device in a message way back in 2005 but it drew no replies. There was a detailed blog post about the sad "sadlerium" written by Jared Keller in 2013: read it here. For reference, I'm including the instructions supposedly intended to help explain lunars to a secondary school audience that were displayed with the contraption. You can see the problem right away. Whoever wrote this, and all the others who approved it, clearly had no understanding of how to communicate with a non-technical audience. It's a mess of jargon and it includes all sorts of detail nearly irrelevant to the primary topic.

By the way, since Phil Sadler (of Harvard) has recently posted about another strange device (that "celestial simulator"), I should add that I asked him about a year ago: any relation to D.H. Sadler and/or the sadlerium?? And the answer is 'no... no relation -- just a coincidence.' 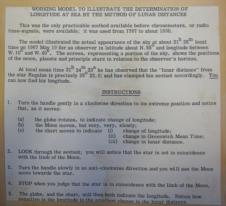