Brad, you wrote:
"No Stellarium, no joy."

It's fun, and it doesn't cost a dime. I was skeptical of it ten years ago, but it's a mature open source (group) project now. Maybe you have some reasons you don't want to install it? For anyone else following along, you can get it from stellarium.org.

Meanwhile, let's get back to visualizing this. I've picked another star for variety. Imagine you're looking at Regulus on the prime vertical, low in the east, from southern New England next fall. It's 18° above the horizon, and its azimuth is exactly 90°. If I now fly off to the south at hypersonic speed, stars on the meridian to the south will rise a degree for every degree that I travel south. Stars behind me similarly fall. Meanwhile, if I'm going exactly due south, the east and west points on the horizon will be like fixed points around which the other stars will rotate. If I imagine myself fixed in place, it's as if the celestial sphere is rotating about me with an axis punching through the sphere at the east and west points. Looking east, I will see stars there wheel around in a counter-clockwise direction. Regulus will remain the same distance, 18°, from the east point, but it will rotate around, tracking the stars falling back behind me. And for every degree that I travel south, the arm extending from the east point up to Regulus will turn one degree. Finally when I have travelled 90° to the south, Regulus will have rotated around 90° placing it now almost perfectly on the horizon (but not quite because of refraction). This has all occurred at a fixed moment of time (my "hypersonic" speed meant to imply we could get there in just a few seconds). So at one fixed moment of absolute time, GMT (and therefore the same LMT as long as we run down one line of longitude), the star is on the prime vertical at the starting point, and it is on the horizon simultaneously at a point 90° south of there. Thus if you know the local time that a star is rising deep in the southern hemisphere, you also know the time when it is on the prime vertical ninety degrees to the north of there.

You can see what I have described in words in the attached video capture from Stellarium below. Notice that the time stays the same. Regulus starts out on the prime vertical, and, after a shift in our latitude 90° to the south, it ends up on the horizon.

There is another way of thinking about this. A sunrise table for a given date is really just a solution of a particular spherical triangle problem, showing values of hour angle for the declination on the date and for different listed values of latitude. The solution is simple and has only one parameter because we set the zenith distance to a right angle (well... not quite... and that's why this doesn't work perfectly). There is an equivalent spherical triangle for the same value of the declination on the date, also calculating the hour angle, where the azimuth is set to a right angle. These triangles both depend on the latitude, but with the latitude offset by 90°.  Same table for similar triangles. That's an analytical way of seeing how these problems align, but I think it's critical to see the positional astronomy, too, which is what I outlined above. 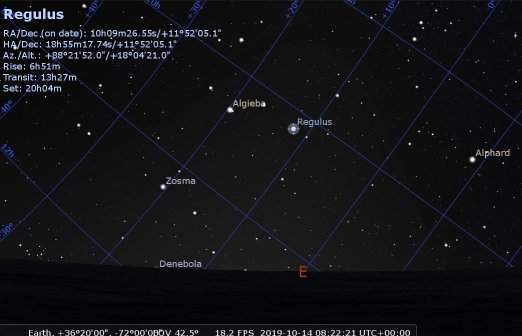