I had written previously:
"Calculations and tables like these should not be used for time intervals greater than 15 to 30 minutes though naturally it all depends on how much accuracy you want in the end."

And Tony, you asked a few days ago:
"Is this limitation solely in the time domain or is it also about the distance covered between the sights? My impression that it is both - not too late and not too far away. Am I right?"

Yes, you're right. In fact, I think it's safer to limit the angular amount of the corrections. If you're being very careful with your work, and you expect the highest possible accuracy from the tables, then you should use MOO/MOB tables (or their equivalent formulas) only when the resulting shift is smaller than 1°. If you don't mind two or three miles error from the calculation, then you could accept MOO/MOB shifts as large as 2-3°. The equations for MOO and MOB are differential quantities. They're really only accurate for distances (changes in altitudes) that are "negligibly small".

An analogy: if we know the sine and cosine of some angle, we can calculate the sine for a slightly larger angle from
sin(x) = sin(x₀) + dx · cos(x₀),
where dx here is the small angular increment to get from x₀ to x (note that the angle dx should be a pure ratio (a.k.a. radians) so if you have the angle in minutes of arc, divide it by 3438). This is a differential relationship. You can either derive it with a little calculus, or you can derive it from the formula for the sum of two angles:
sin(x) = sin(x₀ + dx) = sin(x₀)·cos(dx) + sin(dx)·cos(x₀),
and then use the fact that cos(dx) is nearly 1 and sin(dx) is nearly dx for very small angles. This relationship,
sin(x) = sin(x₀) + dx · cos(x₀),
is exceptionally accurate for angular increments of a few minutes of arc, and it's not bad up to a couple of degrees.

The relationships for MOO and MOB are similar. They are differential formulae. They're excellent for small angular shifts and progressively less accurate for bigger angular shifts. As we discussed previously, in the days of celestial navigation in aricraft, the MOO correction could easily be of the same order of magnitude as MOB since the equatorial speed of the Earth's rotation is 900 knots (and only 450 knots at 60° latitude). Planes fly that fast. For surface navigators, the MOO correction in a typical scenario will be nearly two orders of magnitude smaller than a MOB correction. This means we have less to worry about from errors in MOO computations.

There is a case where the MOO correction greatly exceeds MOB. And that's in orbit. If a spacecraft is orbiting in LEO and maintaining an orientation such that the body or main axis of the spacecraft stays earth-aligned (which is common), then its orientation matches an ocean vessel sailing on the seas below it, as if the spacecraft has a "keel" hanging toward the Earth, but it's travelling at a speed that's roughly sixteen times faster than the Earth's equatorial rotation speed. Dave Walden posted a NASA photo two months ago that illustrated this nicely: 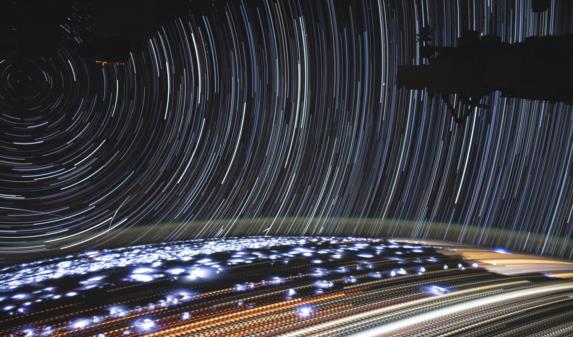 The apparent center of rotation of the stars in this image is directly "abeam", perpendicular to the space station's velocity vector. The space station rotates once per orbit to maintain an "earth-down" orientation. The stars are wheeling about the points on the true horizon (a lot of dip up there!) directly left and right of the station's orbital direction (and remember, this is exactly how the stars are shfiting due the motion of a vessel across the ocean -- they are wheeling about points on the horizon to port and starboard). In this orbital situation, a MOO correction for stars' altitudes would greatly exceed the MOB by more than one order of magntitude.