Good Day Frank and Happy New Year. When you didn’t reply on Monday evening, I suspected there’d be a long reply on Tuesday, as indeed occurred. I’m relieved our celestial education didn’t delay you into the New Year.

I awoke this morning to find Gary had already produced a worthy reply. However, if I might, I’ll add a few embellishments. I think the problem here is that you’re talking about the movement of the stars in the sky, so it's rather complicated. Gary and I are talking about moving a position line on a chart, and it could be any position line as far as MOO is concerned, visual, RDF, Consol, Gee, LORAN, so it's relatively simple. Once you’ve taken the star shot you can forget what happens to the star after that. It could try and outdo Betelgeuse and disappear altogether. It wouldn’t matter; you’ve got the information you need.

The tables I’m talking about are Tables 1 and 2 in AP3270/HO249 which give MOO and MOB for four minutes of time. Some later hard copies of AP3270 also contained a loose yellow card with the same thing for one minute of time and with values to 0.1 minute of arc for every degree of Zn and relative Zn. I’m talking about that card too (see photo).

I wrote: "If you look at tables 1 & 2 in AP3270, all they are are plane trigonometry tables. Although they appear in celestial tables and have units recorded in minutes of arc, they’re not particularly connected with the height of the star.", because if you examine them, the MOO tables are simply the nm you’d travel in four minutes x the cosine of the angle between your track and the star’s azimuth at the time of the shot (not the time of the subsequent fix). Because you’re going to use the correction to adjust your value of Hs or your intercept, they give you the correction in minutes of arc. It could just as well be in nm, because where do we set our intercept on our dividers? From the latitude scale, which is also where we measure our nm from.

The MOB tables are similar, except that this time we assume the body will have the same Hs at a position one degree of longitude west four minutes later (wasn’t this the principle behind the Astrograph and Brown’s hope to use Sumner lines on his Atlantic crossing?), so Table 2 is simply 1 degee, (or 60 (great circle) minutes of arc), x the cosine of azimuth of the body(at the time of the shot)/the secant of the observer’s latitude. Clearly this MOB idea can’t be extended too far, or the stars outside your house would be in the same position at the same mean time every night of the year, which would be very convenient, but boring. E.g. for me, Navigator, says Vega is 29°36.1' Hc and 296.34° Az at 1800UTC on 1/1/2020, but 29°04.4'Hc, 296.98° Az at 18.00UTC on 2/1/20; that's 32’ Hc and 0.6 degrees azimuth difference per 24 hours. The changes in the position of the Moon don’t bear thinking about.

To summarise for MOO, I know of three ways of doing the same thing. 1. You can set four minutes of groundspeed on your dividers; stick one point of your dividers on the point where your LOP crosses the track line on your chart; mark off the required distance up track; and use your Douglas protractor as a parallel rule to mark in your transferred LOP. Your transferred LOP should have two arrows at each end to indicate it’s a transferred LOP and the time written against it should be the updated time. 2. You can simply transfer your assumed position four minutes of groundspeed parallel to track before you plot your LOP using the original intercept and azimuth but anotating the LOP with the updated time. There is value in this method, because at the same time you can move your new assumed position the required distance to the right of track in the Northern Hemisphere to correct for Coriolis acceleration plus any little tweak you want to put in to allow for using rhumb-line steering as opposed to direct gyro steering. 3. You can do the whole thing mathematically and use Table 1 to modify your Hs or intercept values, whichever you prefer, to cause your LOP to appear in the same place as the first two methods. The time written against the revised LOP must be the updated time.

To Summarise for MOB: 1. Plot you LOP using the pre-calculated values for Hc and azimuth. Then move your LOP 15’ of longitude west for every minute late the shot was on the precalculated time using dividers and your Douglas protractor as a parallel ruler. Write the actual time of observation, not the pre-calculated time, against your LOP. 2. Do effectively same thing but move your assumed position 15’ of longitude west for every minute late on pre-calculated time. 3. Plot your LOP from your pre calculated assumed position but use Table 2 to modify your Hc or intercept to give you your LOP at the actual time of shot. I agree that using Table 2 for MOB requires a bigger leap in faith than using Table 1 for MOO, but Table 2 was only ever meant to be used for small time differences from the pre-calculated sights necessary in air navigation. In any case, the results will be no worse than using traditional divider and parallel rule methods of transferring LOPs, because the tables do just what you’d otherwise be doing on the chart with your dividers and Douglas protractor, except they use plane trigonometry. (DaveP) 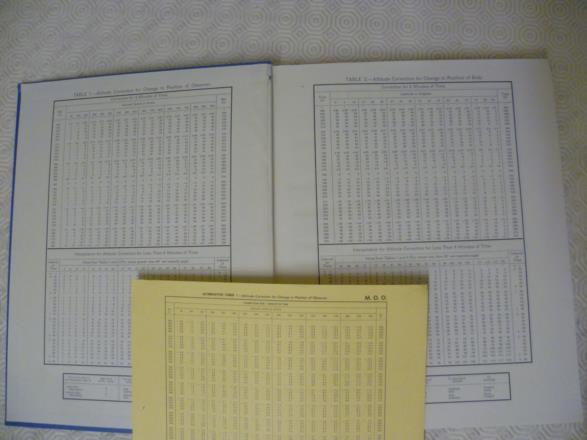