With respect to acceleration errors, my feeling as to why we used changes in TAS/IAS rather than changes in groundspeed when calculating acceleration errors was because we were primarily considering accelerations due to dynamic response of the aircraft, and the pilot’s/autopilots imperfect flying.  We conveniently ignored any effect due to changes in wind velocity over two minutes.  The formula for fore and aft speed changes is fairly easy to prove as minutes of arc error = 3xthe speed change/min in kts (proof below)

However, the most accurate and easily read speed meters were the pilots’ ASIs, which at 40,000’ read approximately half the TAS, so we used 6x IAS change/min.  It had to be very ‘rule of thumb’ in those days.

With respect to rhumb line steering correction, which I can’t remember us using much, which is why I think we must have slipped into DG mode for celestial, we’re forcing the aircraft to cross the meridians at the same angle, which means we could be flying a curve through space.  We’re looking at the rate of convergence of the meridians. Going N-S there is no convergence whereas going E-W it’s maximum, so you can see where the sine track term comes from.  Also, going E-W at the Equator there is no convergence; at the poles it’s maximum, and the rate of convergence wrt speed will be infinite at 90 degrees N or S, so that’s where the tan latitude term comes from.
That leaves us to explain why we use groundspeed squared.  When an aircraft follows a curve of radius r, the centripetal acceleration f =rω2, and v=rω, so f=v2/r, or f= groundspeed2/r. DaveP 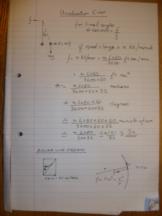