In Chicago, everyone watches espn for sport. In New England, they watch the Weather Channel... A very hip music-scene "hottie" friend of mine in Chicago has a weakness for the Weather Channel that makes her a New Englander at heart. She once called Weather Channel's main office because it wasn't working on her cable. Later had a visit by the cable guy... seems she had the parental block on. She was jumping up and down in her pyjamas thanking him for "fixing the Weather Channel" when it dawned her that the cable guy must be thinking this is some kind of 'pizza delivery seduction' setup! ...true story.

For identifying flights, you can just talk to your smartphone. On my Samsung phone, I double-tap the main button and say "what plane is flying overhead right now?" About ten seconds later it comes back with a list, somewhat disorganized, identifying flights and giving calculated angular elevation and compass direction. The device tries to read the list out loud which is annoying so there's one more tap to make it shut up. But still, an amazing bit of the 21st century!

I used my smartphone for a real navigation problem in the early hours of the storm Friday afternoon. I got on the highway leading to the mainland but realized it was too risky so I had to get off at an exit that leads to a maze of confusing streets. Also every road was three inches deep in fresh snow so you could barely tell where they were. All road signs were coated in snow and invisible. So tap-tap on the phone... then I say "directions home"... and the device happily starts talking "turn left in 800 feet" ...there's a road there? I would have missed it for sure. The positioning data was GPS of course (typically with about 5% GLONASS thrown in). But it's the excellent routing algorithm and the clear voice feature that makes this practical.

-FER
PS: composing this on smartphone... 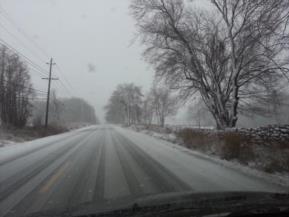