In answer to Frank Reed's question.

Eldridge's Tide Tables includes a page of the Sun's declination for the year and another of the times of Local Apparent Noon, 2018 scans attached.

Eyeballing the rough sight data I mentally estimated the time of the Sun passing over our meridian as after 16-37-30 and before 16-38-00 since the Sun crossed the Greenwich Meridian at 11-56-41 I subracted that time from 16-37-41 for ease of calculation giving our meridian as approximately 4hrs-41minutes which multiplyed by 15 degrees gives a longitude of 70°15'.

As my father, who admittedly was not a navigator but who was a scientist, would have said "that puts us within spitting distance."

Around 1989 I was rocking and rolling on an exposed Parks-Canada mooring bouy on the St. Lawrence River playing with a die-cast WWII emergency sextant I had picked up for a couple dollars in the flea market of the Clayton Antique Boat Show. Seeing that I was also using a scientific calculator along with it the gentleman on the adjacent mooring asked how accurate the readings were. When I told him it was giving me plus or minus about twelve miles he informed us he was a retired Royal Navy Captain and that was as good as he ever expected at sea.

By the way I have clipped out four years worth of these ephemeris from Eldridge enclosed them in plastic liners and carry them in my sextant case along with a copy of Bayless' version of H.O. 211.  Wouldn't the Boy Scouts love me being prepared? 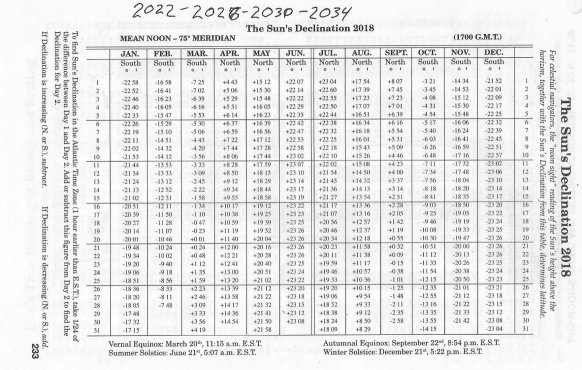 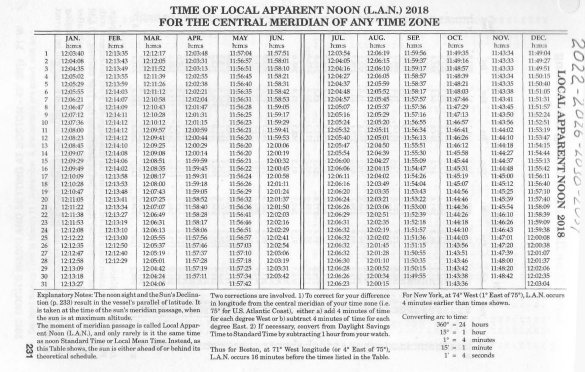