The rule for determining the azimuth with the Bygrave is printed right on the device itself, see attached image.

I am also attaching a description of the use of the MHR1 in German. 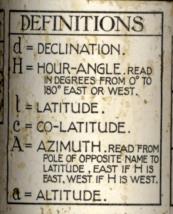