Reply
Re: Comet Donati above Paris 1858
From: Brad Morris
Date: 2019 Apr 21, 12:52 -0400
Robin
The challenge is not merely a photograph of a star field. Greg has demonstrated that kind of photograph multiple times with his digital lunars.
One must also simultaneously capture, within the foreground, an object.  In Frank's instant question, it is the Cathédrale of Notre-Dame de Paris.  We can see details of the structure.  The juxtaposition of the Cathedral and the star field and comet is what makes this a truly difficult image.  Sufficient light to see structural details should effectively eliminate the star field, due to the gain of the imaging system.
It is for this reason we never see stars simultaneously with the moon landings.  The foreground effectively washes out the background.  Image after image from the surface of the moon, with no stars in the background.  Are the moon landings faked (/s = sarcasm)?
Frank asked, is it a photograph or a photoshopped image?  Due to the foreground/background illumination issue AND to the utterly fanciful depiction of the comet, I will go with imaginary image.  It appears to be more of a painting than photoshop, but hey, that's a detail.
Brad
On Sun, Apr 21, 2019, 12:33 PM Robin Stuart <NoReply_Stuart@fer3.com> wrote:

Actually modern off-the-shelf cameras have some pretty impressive capabilities. Here's a picture I took of the Magellanic clouds nearly 2 years ago with a Canon DSLR camera that was several years old at the time. It is a 15 second exposure unguided exposure at ISO 5000 which is not the maximum ISO possible. This was just a test of the capabilities and I'm not particularly proud of it. The focus is obviously rather poor. However I think the limiting magnitude probably exceeds that shown in the "Photoshop"-ed version of Comet Donati. 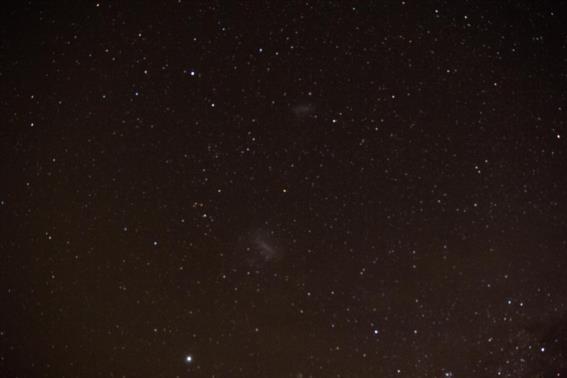