But I think those stripes should have a gradient - be more transparent (less gray) away from the center line. If your idea about choosing the most gray spot as the most "probable" position - then there can be certain cases (with the "gradient stripes" overlaid) when a triangle would contain not just one but up to three "most dark" spots. And the very "center" (whatever that word could mean) of the triangle would not be the most probable position...

I must think on it some more...

That got me curious, so I did just that. (See attached images.) At first I chose smooth gradients, but that made it sort of difficult to tell which "spot", exactly,  was darkest. I think it's much clearer using "stepped" gradients.

Turns out that what Tony theorized was spot on. However, since we know our ship cannot be in three locations at once, it seems to me that one would end up averaging the three darkest areas. In that case, one would end up right back at the "center" again. 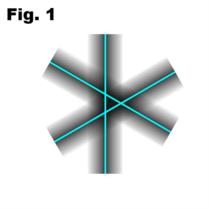 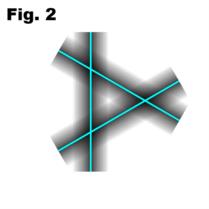