Antoine, you wrote:
"Meanwhile I retrieved the enclosed hand copied diagram which entirely replies to this query. (To you Frank: no longer need for feedback regarding this specific query of the referenced Post)."

Is there any unfinished business from that thread for you? This "diagram" of geometry is quite fundamental, arguably foundational, to understanding lunars, so I'm surprised you're not familiar with it.

You asked:
"WHO was the first Mathematician / Astronomer having the idea of inventing/devising such a diagram as a preliminary step to solve Lunars ? And WHEN?"

This basic geometric principle, dependent on the constancy of the difference in azimuth "before" clearing and "after" and showing the significance of the altitudes dates from the 17th century. I am retelling this from memory from years ago, so I can guarantee that it's not entirely correct in detail, but here goes...

In the earliest discussions of lunars as an option for finding absolute time (today's UT) and then longitude, some commentators noticed that the position of the Moon relative to the Sun, planets, and stars varies from one place to another on the Earth due the Moon's parallax. At the exact same instant of absolute time, two observers on opposite sides of the globe would see the Moon's position displaced by nearly two degrees. This appeared to imply that an observer had to know the longitude (and latitude) in order to find the longitude! Would this requie some long iterative process?? At some point, resolving this issue was seen as a key step in making lunars work. Sometime in the 17th century (c.1675?? ...really just guessing from memory) a French "mathematician" detailed the geometric solution to the problem and explained that it was not necessary to know the observer's position in advance since it would suffice to measure the altitudes of the two bodies along with the lunar distance. Unfortunately, it seems that he thought he had substantially solved the problem of lunars and deserved a reward... until he was reminded that 99% of the problem remained unsolved: calculating the Moon's ephemeris.

You added:
"I am aware that quite a few "classical" clearing methods have been devised."

They're much more alike than they are distinct. Much of the variation in historical methods revolved around economies of computation, which change nothing fundamental (and are irrelevant historical curiosities today).

You concluded:
"Nonetheless they all seem to refer to such layout as the same and only basis to start their deriving their various Clearing Methods."

Yes, it's the fundamental way of looking at the geometry. Solutions derived from that geometry without modification are in the category that I call "direct triangle" solutions. Any other geometric relationships can be derived from the direct triangle one way or another. Many popular methods from the late 18th century through the mid-19th were "series" methods. These can be derived by taking the standard direct triangle equation and differentiating. Of course, as with so many things in math, there are ways of deriving the primary terms of the standard series solutions by "drawing pictures" without knowing a darn thing about differentiation. And that's a good thing!

Below is a version of the standard diagram from an appendix to an edition of the British "Abridged Nautical Almanac". It's worth noting that the diagram was illustrating a series method instead of a direct triangle solution, which reminds us that the geometry is fundamental regardless of the algorithm of solution.

Though lunars were obsolete and rarely practiced at sea by 1850 even on lowly American vessels and twenty years or more earlier on most British vessels, they were retained on exams for navigators through the end of the 19th century because they were an excellent means of torturing students (or more generously, a means of finding those navigators whose skills and understanding were deeper than other students). Yet more remarkable, the pages from the appendix below are from the Abridged Nautical Almanac for the year 1919. Why in the world was anyone publishing details on lunars at such a late date? They certainly had no practical value. Probably we're seeing here the personal preference of one of the editors of the almanac who has managed to slip in these very few pages on lunars at the end of the volume. And even this author acknowledges that they're not practical. His excuse for recommending lunars would work as well today as it did one century and one year ago when this almanac was in use:
"there is probably no better method of becoming an expert observer with the sextant that by practising this observation". 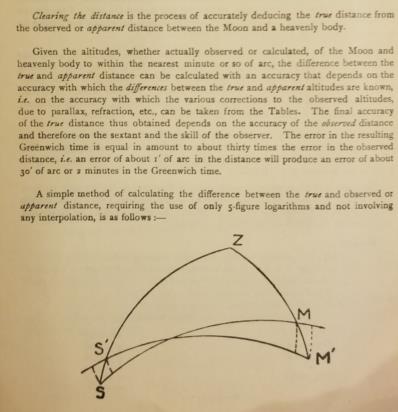