George McClellan was a lunarian. Maybe you've heard of him? McClellan was the first general of the primary Union army in the US Civil War during key early battles, and he was famously, infamously doubted and mistrusted by Abraham Lincoln. Explicitly racist, he believed that slavery was guaranteed by the US Constitution. McClellan was removed from command in late 1862. Two years later he was the Democratic candidate for President of the US, soundly defeated by Lincoln.

In 1852 George McClellan was a surveyor for the US Army, and on an expedition along the Red River he used lunars or longitude by lunar distances to attempt to determine the location where the river, the boundary between modern Texas and Oklahoma, reached the 100° West meridian. Unfortunately, he got the longitude wrong by about 45 minutes (36 nautical miles in that latitude), and for several decades a large section of what is now Oklahoma was administered as "Greer County" of Texas. This "mistake" is about twice the size of the modern state of Rhode Island. Like all interstate boundary disputes in the US, the court with first jurisdiction was the US Supreme Court, and they decided against the Texas claim in 1896, during the land rush era in Oklahoma. 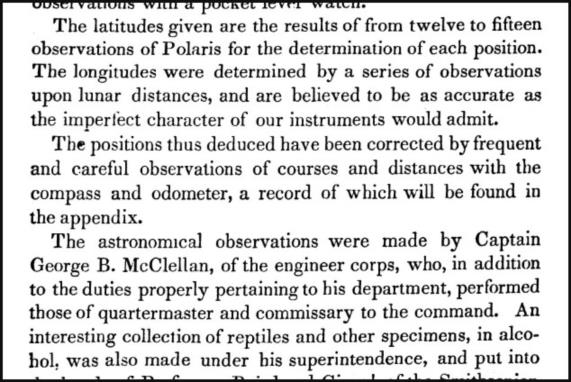