Solution to the external tangents to three circles problem

Adrian F you wrote:  I’ve looked at the diagram long and hard and I’m struggling to say why the three points are co-linear, but I’ve taken a step into the maths of the problem by showing through calculation that they are, for each of several sets of circle-arrangements.  I recognise that’s in a way only re-stating what your diagram shows graphically, but I found it an interesting exercise so thanks for the quiz-question.  Regards, Adrian F
As an aside on my method :
Having assigned notional x and y co-ordinates to the centres of the circles, and a radius to each, the x and y co-ordinates of each of points G, E, S (where the tangents meet) were established by trigonometry.  I found it useful in this to show that the line going through the centre of each pair of circles (say M and O), when extended also goes through the point S where the tangents meet, and that the lengths MS and OS are in the ratio of the radii.  I used a spreadsheet to calculate the positions of G,E,S for any desired permutation of circle parameters, and the three points are co-linear in every case I’ve looked at.

AdrianF
Your argument adds strength to my paras 9 & 10, the weakest part of my own explanation, which I set out below.  Apologies for the corny lettering of my diagram (M, O, N, G, E, & S)
Googling ‘external’ tangents to three circles leads you to Monge’s Theorem in Wikipedia.  Yes, there really was a man called Monge.  However, the explanation doesn’t make a lot of sense to me as a non-mathematician.   More Googling does drop a lot of clues, so I thought I’d try and put those together in a way that would convince the man on your local omnibus.
1.  Consider for a moment three spheres rather than three circles.
2.  Place those three spheres on a sheet of stiff card.  A dab of glue from a glue gun helps a lot (Photo one).
3.  Place a second piece of stiff card on top of the three spheres such that it touches all three spheres (Photo two)
4.  Slide the top card down until it meets the bottom card.
5.  You’ll notice the two cards intersect along a straight line (which we’ll call ‘the fold’), as do any two non-parallel planes (Photo three).
6.  Notice also that the lines touching top and bottom of each pair of spheres are also pairs of external tangents which intersect at the fold.
7.  Now just imagine you wrap a piece of paper around one pair of spheres. You would get something looking like an ice-cream cone thus proving that every pair of external tangents for a pair of spheres meet at the same point.  I.e. at the fold.
8.  We can now slice through each pair of spheres in turn so that we get two exact circles, and the external tangents will intersect somewhere along the fold.
9.  Admittedly, you have to slice along three different planes, to get three pairs of circles, but this doesn’t matter, because all tangents to each pair of spheres intersect at the fold.
10.  So, are the distances in the 2-D circle diagram between each intersection true distances?  No, because you are not looking at the fold from any perpendicular direction.  However, you could measure the true distances from a 3D sphere model (Photo 4)

Now, It would be lovely if somebody could relate this problem to a situation in celestial navigation?  DaveP 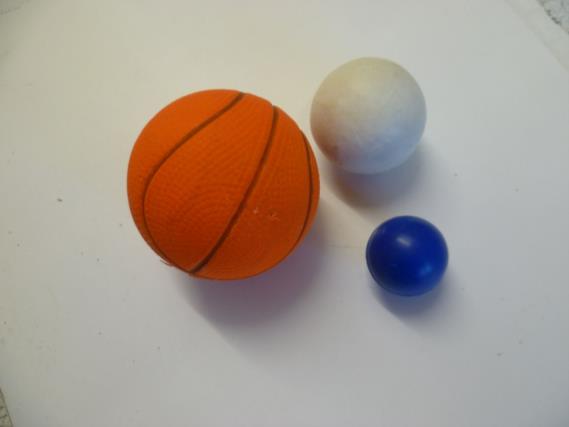 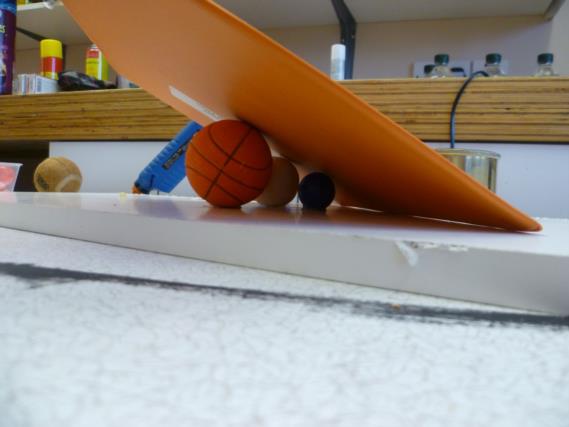 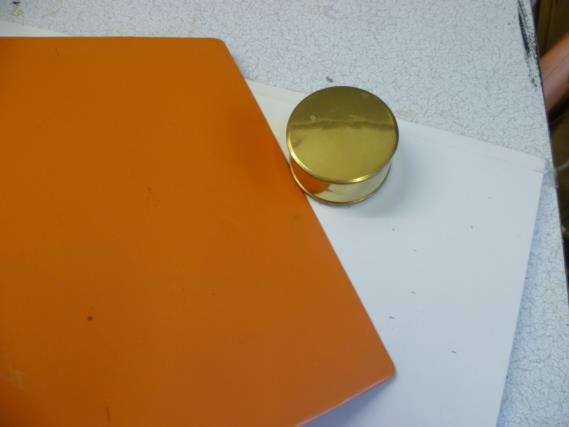 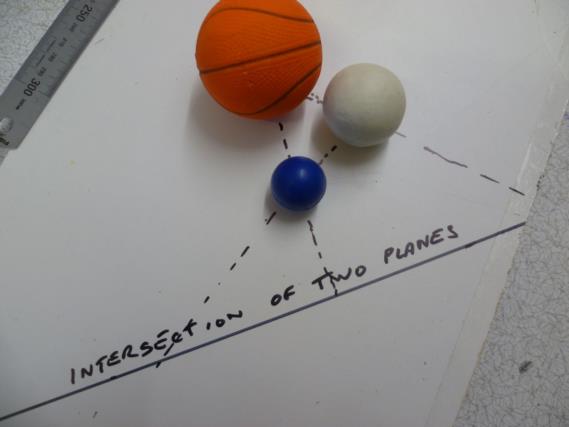