Just found this resource - some really interesting articles here - for ex-flyboys though.

And some interesting posts navy and airforce.

An interesting - state of the union - I work in Canberra - ACT - Australia. (though I live in the Southern Higlands of NSW - North of Canberra 180 kms - 2800 ft up (where I will be re-learning asto with both a marine and bubble sextant).

Anyway my story on navigation - for those not familar with the geography - Australia is a big country with big drives between towns.

Anyway a staff member was telling me she was going to Brisbane (she said down to Brisbane) but driving inland then to Brisbane.

So to get you all orientated - Brisbane is approx 1184 km NNE of Canberra - a 12 hr drive up the pacific hwy. - however she was driving using her mobile GPS to get there inland where there is no mobile tower to lock her GPS onto.

She is 25 - has a partner and a young child - and admits a total lack of understanding of maps, navigation - what NSWE is - or were North is - and how even to find herslef on a map.

That is the state of the union folks!!

I took her outside - had an old mercator in my car of Canberra and surrounds - It was midday local -- so showing how to find North with your watch (of course she had a digital watch) - was difficult to conceptualise.

I showed her that every map has a North pointing pointer somewhere on it.

Showed hoer how to orientate the map to north - and a quick 10 min navig course.

Which sadly probably went straight out the otherside of her brain -.....

Roll on Xmas and the arrival of my marine sextant. 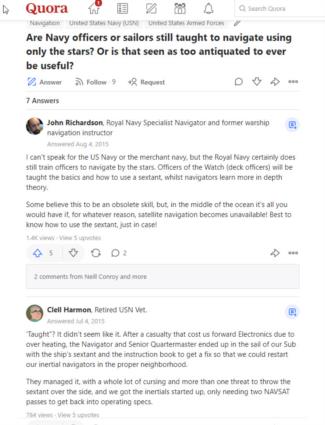