Looking at the photo of Worsley and the photo of the Shackleton sextant on line, the frame of Worsley's sextant is a match to yours, so I'd say you are right about having the same model.

The photo on Chasing Shackleton shows what appears to be a fairly large scope on the sextant Worsley is holding.  The on line photo does not show anything like that as far as I can tell.  Does your have a large scope like that?

My Heath may not be the same model as yours or Worsley's, and it is not easy (for me, anyway) to use, but it is still a very nice showpiece.  With my three-year-old grandson here often, nothing is safe, so it remains in its box under my bed most of the time.

Hi Stan
The sextant came with the binoculars as standard equipment.  The binoculars have one adjustment for focus, which affects both eyes simultaneously.  There is a ring on the eyepiece closest to the frame, which capture the binoculars on the rising telescope piece.  That ring doubles as the eyepiece. There's a place in the box to stow the binoculars, which is obviously factory issue.  There is no adjustment for intraocular distance.
I don't understand how you rock the sextant when using these!
The date on the inspection certificate reads 1921, placing it at the right time.  Furthermore, the James Caird tours with a boxed sextant.  In pictures of that sextant, you can see the binoculars!  There is also a missing telescope in the sextant that tours with the Caird, you can see the custom stow location in the box.  I have that stow feature and the telescope that goes with it.  Now clearly I don't have Worsley's sextant.  What I have is the exact make & model of the same.
It occurs to me that Heath provided the sextant to the expedition for advertising / endorsement purposes.   Its a top of the line model, with every feature known to man as standard! Its clear that Worsley agreed, as this is the one (of several available) he chose to use for the most demanding journey of his life.
The all zeros is consistent with it being a top of the line instrument.  Probably cherry picked out of the normal run of sextants.
One of the shades is a star astigmatiser.  It draws the star into a line perpendicular to the frame.  Again, standard.
Brad

That binocular is completely new to me.  Is it custom to the sextant?  Does it have an interocular distance adjustment?  Is one eyepiece missing?  Were the two haves independent of each other like a pair of Navy night glasses, or did one side have an adjustment plus a control that adjusts both sides together, like more common binoculars?

I can't read the label in the photo, but the clamping mechanism and the shape of the label say Heath Hezzanith.  The diffuser looks pretty much the same, but the magnifier swingarm is different.  The biggest difference is the frame - mine is of the three-ring type.  Any idea of its age?  Bill Morris helped me date mine as a 1905 unit. 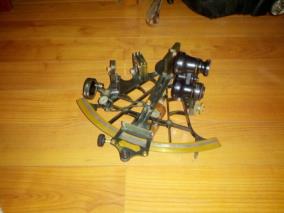