Bottom Line at the Top

After last night, I am enormously encouraged by my cellphone-as-sextant efforts, and plan to pursue further testing of the concept.

I would appreciate your help in checking my logic here, Sean.  What I did was to get the lunar "Main Correction" (plus horizontal parallax) from the back of the Nautical Almanac.  The instructions say to apply these corrections but subtract 30' if you are taking an upper limb measurement.  Since I was aiming at the moon's center of mass, I subtracted 15'.  I have never tried to think about shooting for the *center* of the moon before.  Have I got my logic right?

As I indicated in my earlier posting, in the Dioptra app, as in some rifle scopes, the crosshairs don't cross in the middle.

However, I downloaded a different Android app yesterday, called "AR Bearing + Baseplate Compass" by AppyHand.  It is superior to Dioptra in that the crosshairs DO cross in the middle.  So there is no need to tape white thread to your cellphone to try and get precise/well-defined crosshairs.

Futher, "AR Bearing" shows a yellow warning icon on screen if it thinks you need to recalibrate your phone's sensors by moving it through a figure-of-eight pattern.  Once you do this calibration, the icon goes to green.

I first got the free version, but discovered that if I paid $3 and got the "Pro" version, I could enable the on-screen button to take a picture (complete with overlay of crosshairs, time, and altitude measurement) of what I was seeing.

Now, at present, this app measures angles only in whole-degrees or in Nato mils...of which there are 6400 in a circle, which works out to 3.375 minutes of arc per mil.  So I have to do a conversion to get my results in degrees and minutes.

Last night, the sky was mostly clear of the high-haze we had earlier in the week. I still saw some white fuzziness on my camera screen, but in the middle of that fuzziness was a white object with moderately well defined edges.  I couldn't see the crescent shape of the moon, but rather saw something more like a misshapen circle.

These are the two factors that lead to my current encouragement compared to earlier this week:  first, that I could get an app with proper crosshairs.  Second, that I discovered that I could see a defined edge to the moon's disk.

I took 8 shots of the moon, recording the times of each, aiming for the center of mass.  Then, when I was back indoors, I inspected these photos and picked out the 4 shots where the crosshairs were most thoroughly centered on the moon's disk.

I then took these 4 shots, and did a graphical sight-averaging of the sort described on pages 36ff of David Burch's "How to Use Plastic Sextants: With Applications to Metal Sextants..." (available at http://www.amazon.com/How-Use-Plastic-Sextants-Applications/dp/0914025244).  This let me pick the two shots out of my four that were most likely to be accurate.  (Of the other two, one lay above the moon's slope and one lay below it.)

I then selected one of my two "good sights" and reduced and plotted it as I would any other, and came up with an intercept of 33.8 nm away.  For a "sextant" that can fit in a shirt pocket, this seems like extraordinarily good results!

Once I selected my best shot using the sight-averaging technique I use with my metal sextant - a technique that is, for me, tried and true -  I went back and looked at the photos I took more closely.  As it turns out, it is visually obvious which are the good shots, and which should be discarded.

I think I will not need to do any sight averaging or graphing, but rather just inspect my shots to see which has the crosshairs centered most accurately on the moon.

I am attaching two photos to this posting: one is the shot I plotted, a good shot, and one is a discard.  You can see the difference if you look closely at the crosshairs on the disk.  (The light you see in the lower left is a streetlight.)

My next to-do items:

· find the envelope of mylar samples that I purchased for $5 from http://www.mirrorsheeting.com/ which is buried somewhere on my desk downstairs.

· test with my old cellphone to see if there is an appropriate thickness of mylar that I could hold over the camera lens that lets me point my phone at the sun and see a well-defined edge to the disk.  I presume if I could do this, I would be likely safe from damaging my cell's camera.

If this pans out, I can use Andrés Ruiz' Nautical Almanc and Sight Reduction tables on my Android phone, keep some mylar in a business-card carrier and have an all-in-one celestial navigation solution in my shirt pocket.  Wowee!!

I have just written to the developer of the "AR Bearing" application, and requested two things:

· That in the photos the "AR Bearing" app captures, not only the hours and minutes are displayed, but seconds as well.  If the app could do that, my need for writing down the times of each shot could be eliminated, which means I need only my cellphone, and not my cellphone + a notebook.

The Android app called ClockSync lets me compare my cellphone's system time, displayed on the AR Bearing photo, with UTC.

· That he consider offering an additional display choice for bearings and altitudes, namely degrees-and-minutes.  This would give equivalent (or better, if the hardware is capable of it) accuracy to that offered by mils.  It would definitely be easier to use for me in degrees-and-minutes than mils.

I can imagine that two cellphones might have differences between their inclinometers.  Some of the 33' of error I observed last night is definitely "personal error"...but mixed in with that may be some "instrument error."  If this is so, then each cellphone might need to be tested by its owner for its own unique instrument error...in much the same way as individual sextants are tested/rated by the manufacturer for their instrument error.

Frank, I am thinking of the email I have sent to "AppyHand".  It would help in my continuing dialog with the developer to know roughly how many members there are in this mailing list.  It might be helpful to be able to tell him how many people there are on NavList who could be (potentially, at least) interested in playing around with his appliation, as he considers my enhancement request.  Also, it would be interesting to know something of the geographical distribution of the list members, if that is knowable. 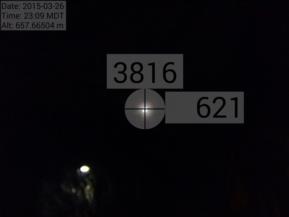 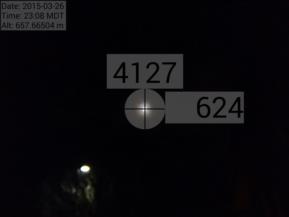