Here's a sketch from the December 25, 1950 issue of "Aviation Week" showing Link Aviation's "D-2 High Speed, High Latitude Celestial Navigation Trainer". The drawing does not immediately convey the size of the thing until you realize that those are stairs spiralling up into the interior of the dome. This is a planetarium dome on gimbals. Its diameter, 30 feet, is comparable to the planetarium dome at the Treworgy Planetarium at Mystic Seaport, which quite a few of you have visited. This machine weighed 22 tons. 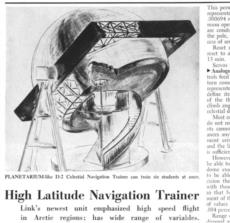 According to the article over 500 stars were displayed including all of first and second magnitude and some third magnitude stars. The operator of the simulator could set airspeed up to 1500 knots, altitude up to 100,000 feet, latitude from 25°N to the pole [probably should be 55 N], wind velocity up to 300 knots, and air temperature from -70° F to +40° F. Up to five students could sit on a platform near the center of the dome and shoot sights using periscopic sextants. Note that the dome apparently did not work with a central projector; instead individual stars were displayed by small lights on the dome itself. And that, of course, is why the dome itself had to be mounted on gimbals.

A planetarium can be quite useful for discussing celestial coordinates, and of course its usual traditional role, learning the constellations and displaying the daily motion of the stars, is quite valuable in a celestial navigation class. But normally a planetarium is a poor place to practice actual sextant sights. The reason for this is simple: we're too close to the dome, and an observer's exact position introduces a large parallax in the positions of the stars. It's not hard to work out. Suppose you're at the exact center of the dome (15-foot radius), and you're looking at a star 45° high. If you move six inches away from the center, how much does the altitude change? The solution for this problem applied in this Link Simulator is described in the article, if I understand it correctly. It says that "23 of the important navigational stars" are "collimated for navigational purposes". But it's not quite clear to me how this would be set up, and how would it appear when displayed? My guess is that those stars would be projected from something like slide projectors poking through the dome. Would they look right visually? This collimated projection would ensure that the stars would have the proper relative positions in some region around the center of the dome? How big would that observing area be?

The remainder of the article is at archive.aviationweek.com, but I'm not sure if it's available without a subscription. In any case, it's under copyright, so I'm only quoting from it here --can't post the whole thing.