Jackson, you wrote that the image below
"purports to be an image of Earth, Venus, and Jupiter taken from the surface of Mars." 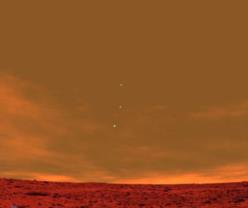 Purports, indeed. I think it's very likely a computer-generated fake. Images from the surface of Mars don't look like this. The clouds are wrong. The surface is a stock image. The planet images are too large (over-exposure to such an extent would ruin the rest of the image). And where's the Earth's moon? There are, in fact, images of Earth and other planets taken from Mars, and they are much less impressive visually. This thing smells of "forward fodder" --a carefully-crafted fake designed (or doomed) to get passed along as an email forward.

As far as navigation and position-finding are concerned, you can still work this as a textbook problem. There's probably no way to determine GMT, but we can probably get the date, and I would guess within 24 hours due to the rapid motions of the inner planets. In addition, we can determine the approximate latitude on Mars given the altitudes of the planet images above the horizon and their orientation relative to the horizon. Bear in mind that the axis of Mars does not point anywhere near Polaris. Its north celestial pole is about halfway between Deneb and Alderamin. But there are many "planetarium" programs (software, apps) that accurately display views from Mars with the correct celestial pole, so it's no issue in practice.