I keep going back to the photo you posted:
File: 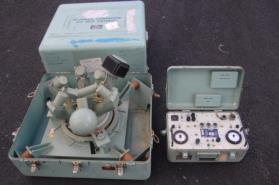 ...and trying to imagine what it could do. The best answer I return to again and again: it seems to be a portable planetarium projector. Is that your working theory, too? The smaller case seems to have enough knobs and dials to qualify as a small-scale console. Presumably the operator would sit at some distance from the other device and a cable would run from the multi-slot plug over to the other device.

I am guessing that the six little cans or cylinders are projectors, each with an individual bulb inside. See my attached sketch below. There are wires running to each of them from what appears to be a power supply. They point down into what appears to be optical "piping". Each can is directly above a right angle corner that probably holds a prism. I can imagine a finely etched projection plate of a section of the northern sky and a converging lens inside. These six projectors then aim into that dome-shaped section beneath them. Now either there is a little tiny planetarium theater in their for very tiny space aliens (maybe the little greys from Roswell were really little!) or that section then feeds to some sort of larger lens output. Is there an opening on the bottom of this case to project from? Or does the whole thing turn over? How does the light get out?? Does that spherical ball un-screw to reveal a large projection lens??

And what about a projection surface... Naturally the USAF may have invented a version of the inflatable planetarium dome (before you did) and kept it under wraps. I have another possibility... Notice how the main components seem to be mounted on a floating platform on shock-proof points at each corner. They appear to be designed to protect the main components from vibration. So maybe this device was used in-flight for celestial navigation lessons where student-navigators could study the star patterns "under the dome" and then take sights while flying. If that's at all possible, then perhaps the projection surface was just the cylindrical interior ceiling of a C-135? It wouldn't be quite as good as a full dome, but for many purposes that might work. It's about 10 feet in diameter. Or a dome partially fitting the cylindrical fuselage?

I'm just throwing this out there for discussion. Hope the sketch below entertains. It's a purely speculative model. Phil, can you post more photos? I hope someone can turn up some official records on this thing. If it turns out it's actually an in-flight planetarium projector, somebody owes me a beer! Ha. 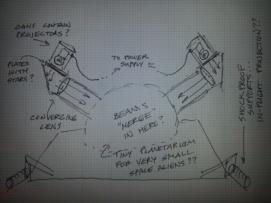