Thanks Gary.  I wouldn’t have wanted to fill in several of those on a dark night.  I think I prefer the Vulcan/Victor one below.  There’s more space to think. I’m afraid I’m down to photocopies of photocopies now, so they’re getting a bit smudgy.  It was two star on the front and three star on the rear, but don’t ask me what a three star sandwich fix was.  I never did one.  Three star yes, but three star sandwich; I’d have lost count of all the shots.  Two stars were enough for me.  Two star sandwich fixing was ideal for the Vulcan because the life-raft stowage behind the pilots meant the aircraft had to have two sextant mountings, one either side, and they’d let you sign for an extra sextant too, so you didn’t have to keep moving between stars.  You just had to move between sextants trying not to fall down the hole in the floor where the entrance/exit door was.  DaveP 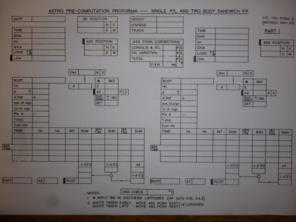 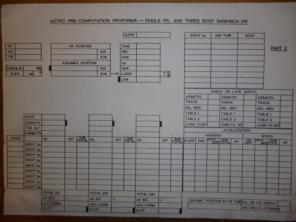