Greg, you wrote:
"The Curiosity Rover position hasn't changed over the last three hours so not sure if the position is real time updated."

I can confirm now that the coordinates in your app are the landing coordinates --where the rover was back in August, 2012. At that time the rover was close to the location your app is displaying -4.5895, 137.4416 (the Wikipedia page currently lists the landing location as -4.5895, 137.4417). It has travelled a good distance since then. From the map, I estimate the position three weeks ago was around -4.725, 137.383 (+/- 0.003). Is it enough to change Mars time?? Even if they were keeping local time, the difference would amount to about fourteen seconds in solar time? In any case, I doubt that they bother with this at the various mission control sites. They probably pick a longitude shortly after landing and then declare that to be the standard longitude for time-keeping on that mission. That would be the simple and efficient approach. 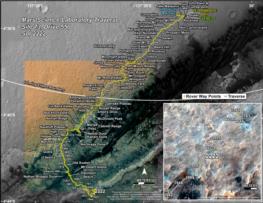