Celestial by traditional altitudes would be a waste of resources on Mars. If we insist on a primarily manual celestial backup, then use the system that I have advocated many time in NavList messages for Earth navigation: visual observation of satellites. And on Mars, we can use a nice bright one: Phobos. Under optimal conditions, when Phobos is relatively close to the observer's zenith, you measure the angular distances from Phobos to two stars in perpendicular directions using a sextant or photography. For example: I visit Mars today, 11 Nov 2018, and I land near 0° N, 10° W. I look high overhead and find Phobos near the zenith with Saturn and Antares not far away, as in the image below. I measure the angular distances and get:

Then I move one degree (60 martian miles) to the north, and I find:

Finally I move one degree west from the original location, and I get:

The Saturn-Antares distances are included merely to demonstrate (and test) that star-to-star distances are not changed by this process. I have ignored refraction here, which would be reasonable even on Earth close to the zenith and completely valid on Mars where the air is a thousand times thinner. Notice that from the first to the second position, the Phobos-Antares angle would change by about 0.56°. Similarly from the first to the third position, the Phobos-Saturn angle would change by about 0.56°. That's half a degree change in angular position for a one degree change in martian ground position, equivalently half a minute change in angular position for one martian nautical mile on the ground. And we could easily have worked this out in advance. Phobos orbits about two martian radii above the surface of Mars. Therefore a shift on the surface of Mars corresponding to some angle at the center of Mars yields an angular shift in the position of Phobos against the background of the stars about half as large.

Assuming our observers have their smartphones (martian smartphones), they could photographically measure angular distances to about a tenth of a minute of arc with good odds of accuracy even using today's smartphones (with heaters). Some analysis would be needed to deal with the finite size and changing phase of Phobos, but that's not complicated if we have some modest computing power available (and we do... or we're dead anyway). We can also assume that they have excellent and frequently updated ephemerides for Phobos. There should be no significant error in the analysis beyond the original observation error. That error of 0.1 minutes in the measured Phobos-star distances (or equivalently the coordinates of Phobos on the background of the celestial sphere) would correspond to twice that angle on the surface of Mars or 0.2 martian nautical miles, roughly 0.2 km as Greg has pointed out. So that's 200 meters accuracy and without much effort.

To contemplate the changes in accuracy under different geometries, picture a cone with its apex at Phobos and a circular open end intersecting the martian surface at your location. When Phobos is low in the sky, the open end of the cone intersects the surface at a shallow angle, and you lose accuracy along the direction pointing toward the azimuth of Phobos, but you retain it in a perpendicular direction, yielding a long but narrow error ellipse (the width will increase from about 200 meters to about 300 meters when Phobos is low since it is also further away then). If you worry about navigation under conditions when Phobos is never high in the sky, note that you can apply the concept of a running fix. Get one long narrow error ellipse (long axis aligned with the azimuth of Phobos). Then wait a while. When the azimuth of Phobos has changed by 30 or 40 degrees, repeat the process. You'll get a second long narrow ellipse on the ground, and you cross those just as you would two common lines of position.

It's easy and accurate.

But none of this matters. Position-finding on Mars will be trivial in nearly every case because you can see everything from orbit. Satellites in orbit will be your friendly "Big Brother" watching your every move. No one will ever be lost... except in certain rare circumstances, like martian spelunking, and also in one fairly common circumstance: dust storms. During dust storms all forms of celestial navigation will be nullified before almost all other options.

Incidentally, Brad mentioned that presently orbiting martian satellites do not transmit useful navigation signals. But does that matter? If we're only talking about a secondary navigation system, we don't need proper signals. As long as there is some basic radio signal from the satellites, which should be available even with current satellites, at least in an emergency, we can use a system similar to Satelles (which itself is supposedly an update of the old Transit system). So it should be possible to create satellite receivers that will give fixes on Mars even today, if this was considered desirable.

So when will humans get to Mars? What? You didn't see the mini-series?? We arrived two years ago, and it was all quite heroic. Yay. And then we spent weeks getting ready to go last summer, and it was all quite melodramatic and emotional and maybe it will be heroic next season. Yay. And Jason Bourne has already been there and done that. Yay. And heck that was just a retelling of an earlier trip to Mars when Batman almost made it to the surface. Double Bat-yay! Why go to Mars when we can experience the vicarious thrill sitting on our couches?? It's cheaper, too.

Frank Reed
Note: I generated the angular distances above using altitudes and azimuths from Stellarium. There are probably better ephemerides available even now, and these should not be taken as perfectly accurate, but they are certainly accurate enough to illustrate the point. 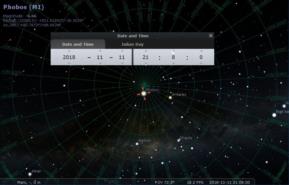