A nice video, Greg. Thanks for the link! 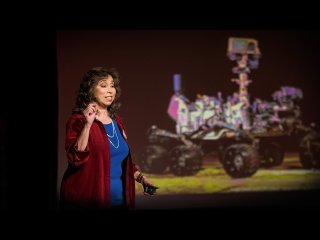 That's not jargon in her talk, by the way. Coining "fun words" like "yestersol" and "nextersol" is a good way to play with the language. It's amusement, not technical obfuscation. As a bureaucracy, NASA is really, really good at creating obfuscatory jargon, and it's nice to see this more playful approach.

We can speculate... When there are thousands of people living on Mars, will they say today and tomorrow, or "tosol" and "nextersol"? I'll bet on "today" and "tomorrow". For that matter, will they speak English or Chinese or some other major language, or will they speak some crazy amalgam of multiple languages (an unlikely outcome, popular in science fiction)? Wake me in fifty or sixty years, and we'll conduct a survey (when I say "wake", I mean unfreeze my cryogenically-frozen corpse).

As TED videos go, I would give this one 2.5 out of 5 stars. It's just a little chat about some fun at JPL mission control and going out for food at 3:00 in the morning (LA time). There's no discussion of the wider world. And seriously, it's not as if the folks following the Mars missions are the first people on Earth who have ever had to deal with schedule shifts like this. One might even scoff at the video as an example of "rich people problems" (or "academic problems" since no one at JPL gets rich). Workers in tough, low-paying jobs have been doing this sort of thing for many decades. There are plenty of nurses, police officers, restaurant workers, and more who work on schedules that rotate radically (and not by that relatively easy forty minutes a day). Professional mariners can experience something quite close to this when crossing the Pacific (roughly one hour time shift every two days on many crossings) assuming just longitude changes and no rotating shifts, which would make matters even worse. It would have been nice to at least acknowledge this.

Oddly enough, when I lived in Chicago and was deep in a software development cycle, I frequently ended up on a schedule rather close to some Mars time, though I usually jumped ahead an hour a day. Since Chicago is a 24-hour city, it was never a problem finding something to do, but it was certainly difficult being on a schedule that didn't match my friends, especially when I was going to sleep at 3:00 in the afternoon and waking up at 11:30 at night. Few other people live on that schedule, and I would tend to rush forward (two or three hours a day) when I go to that point in the cycle.

A more serious problem with the "Living on Mars Time" story is that, eventually, there is no unique Mars Time. Obviously, there is a different time in each longitude. If the terminology made sense, it would include coinages like "yester-curio" and "curio-morrow" for yesterday and tomorrow at the Curiosity rover. Of course those coinages don't exist because shortly after landing (the speaker mentioned 90 days) they become rather pointless since the landers and rovers work more-or-less autonomously. Some of the team assigned to the InSight lander will be living on "Insight lander time" for a few weeks because they have to get the instruments deployed in a fairly involved process. But after that's done, it's a static station with a rather boring job that will deliver seismic and other data 24 hours a day (earth day).

Oh wait, but there is a "Mars Time". There are now only two functioning craft on the surface of Mars, and InSight and Curiosity just happen to be at nearly the same longitude. That should change back to no Mars Time or multiple martian times in a bit more than two years when three new rovers (US, European, and Chinese) land at different locations.